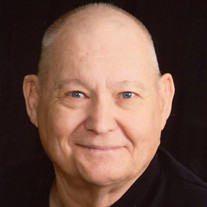 William Joseph Frederick, Sr. age 75, passed away peacefully at home on November 22nd, 2017 with his wife and family by his side. Mass of Christian Burial will be held at 10:00 AM, Monday, November 27 at Saint Francis Borgia Catholic Church in Blair. Graveside services will follow in the Holy Cross Cemetery. Visitation will be held Sunday, November 26 at Campbell Aman Funeral Home in Blair from 6:00 to 8:00PM with a Vigil at 7:00PM. William J Frederick, Sr. was born December 31, 1941 to Ralph and Doris (Olson) Frederick in Hartville, Wyoming. Bill worked over 40 years as a heavy equipment operator building roads and highways, until his retirement. He always said he liked going to work each day because he enjoyed what he did. Bill met Annette Chenaille on Sept 10, 1962. Two weeks later, on their second date, Bill asked Annette to marry him and she said yes. They were married on April 15, 1963 at St Francis Borgia Catholic Church in Blair, NE. They were married for 54 years. Their first home was the Thone School in Herman, where he remodeled and added an addition to it. To this union they were blessed with four children. His greatest joy was watching his children grow and teaching them many skills they would use throughout their lives. Bill and Annette enjoyed camping and traveling across the United States. Branson Missouri and the mountains were favorites, with family trips to Branson being the most cherished of all. His greatest joys were his children, 18 grandchildren and 8 great grandchildren. Bill enjoyed watching the Husker games and collecting Husker memorabilia. He enjoyed deer hunting for 42 years. He had his two largest bucks mounted, which sparked many years of memorable conversations. A highlight was hunting with his children and grandchildren. Even though you didn't always see it on the outside, Bill was a very loving and tenderhearted person. He was a loving husband, father, grandfather, great grandfather, brother, uncle and friend. He is survived by his wife, Annette and children William Frederick Jr (Penny), Theresa (Scott) McMains, Amy (Chris) Mommsen, brother Ralph E Frederick (Debbie), sisters Kathy (Nick) Fiore, Pat (Tom) Terlitsky, sister-in-laws Carol Frederick, Agnes (Larry) Willis, Toni (Victor) McIntosh, grandkids, great grandkids and numerous nieces and nephews. He was preceded in death by his son Paul Frederick, both his parents Ralph and Doris Frederick, mother and father in-law Francis and Irene Chenaille, brother Robert Frederick, brother-in-law Frank Chenaille, sister-in-law Shirley Frederick and nephew Mark Frederick.

William Joseph Frederick, Sr. age 75, passed away peacefully at home on November 22nd, 2017 with his wife and family by his side. Mass of Christian Burial will be held at 10:00 AM, Monday, November 27 at Saint Francis Borgia Catholic Church... View Obituary & Service Information

The family of William Joseph Frederick created this Life Tributes page to make it easy to share your memories.

Send flowers to the Frederick family.