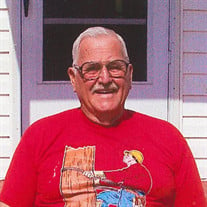 William was born March 6, 1936 to William Lloyd Cowan and Nelle Mae (Cushman) Cowan. William passed away on April 29, 2020 in Blair, NE at 84 years of age. William remembered attending schools in NE, TN, NM and NC before earning his diploma in Hemingford, NE. William (Bill) worked many different jobs through his life including Chief of Police in Blair, NE and Utilities Manager in Hemingford, NE. He had many different carpenter jobs too, before going to work for BNSF RR in 1978 as a Systems Electrician where he traveled through-out their territory from Washington to Florida. Bill retired from the BNSF RR in NOV 2001. Bill was proud of being a Mason and Shriner. He was a past Master of Guernsey Masonic Lodge 49 and started in Alliance Masonic Lodge 183 (Alliance, NE) and was a member of Tehama Shrine Temple. Throughout his life he enjoyed riding motorcycles, getting together with family, playing cards, and making and giving away home-made schnapps. Bill lived most of his life in NE and WY, except his early years where his family traveled with his father for his jobs of dam building. William is survived by his loving wife of 25 years Leota L. (Miller, Wiese) Cowan; sister Alice (LeRoy) Sheets of Central City, NE; children: Jay (Susan) Cowan of Wheatland, WY, Christian Cowan of Guernsey, WY; Vickie (Tim) Lewis of Guernsey, WY, Chet Wiese of Blair, NE, and Tena (Eddie ) Boucher of Blair, NE; eight grandchildren and 18 great-grandchildren; numerous nieces and nephews. William was preceded in death by his parents, infant son Jeffery, sisters and brothers-in-law: Peggy (Neil) Reed and Bonnie (Marvin) Johnson. Memorial services will be held Monday June 29 at 2:00PM at Campbell Aman Funeral Home. Visitation will be held prior to service at the funeral home beginning at 1:00PM.

The family of William "Bill" D. Cowan created this Life Tributes page to make it easy to share your memories.

Send flowers to the Cowan family.