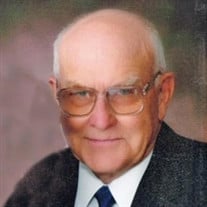 Walter Hans Japp, Jr, 89, son of Walter Sr. and Marie (Wrich) Japp, passed away on Saturday, December 19, 2020 at Memorial Community Hospital in Blair. Visitation will be held Monday December 28 a Campbell Aman Funeral Home with family receiving friends from 3:00 to 6:00PM. Private funeral services will be held with Burial in the Kennard Cemetery. Walter attended Peaceful Hill rural school (District 57) in Washington County. He graduated from Blair High School in 1948. Walter enjoyed his life’s work of dairying and farming. On November 8, 1953, he married JoAnn Jacob. They lived together for 48 years on the farm place southeast of Kennard, originally owned by Marie’s family. Walt and JoAnn moved to Blair in 2001. Walter was a 67-year member of Emmaus Lutheran Church in Kennard, where he had been a Trustee on the Church Council and former President of the Council. He was President of Peaceful Hill School Board. Walt was an active 4-H member, showing beef cattle, hogs, and dairy animals. His 100% grade on milk barn cleanliness was a point of pride. Walt was a member of the Dairy Council. He attained the rank of Sergeant in the U.S. Army, serving stateside during the Korean War. He was a drummer with “The Music Men” combo, together with his brother-in-law Gorlyn Hagerbaumer. After many years of twice-daily milking routine, Walt and JoAnn also enjoyed traveling to trips including Europe, Australia, Hawaii, Alaska, New England, and several cruises. Walt loved to dance. He even met his wife JoAnn at a dance, although he had to teach her the steps to accompany the music. Walt was an American Legion member at Herman, NE. He enjoyed the camaraderie of his morning coffee group. Walt liked to watch Husker football games, volleyball games, and the local baseball games in which his sons played. Walter was preceded in death by his parents Walter, Sr. and Marie, and his siblings, Mildred Krampe, Lyle Japp, and Mary Lou Andersen. Walt is survived by his wife JoAnn and his four children and their spouses: Dave and Cheryl Japp, Ted and Lori Japp, Janice Japp and Edward Mantler, and Diane and Chuck Trofholz. Walt is also survived by 12 grandchildren and 17 great-grandchildren. Memorials may be directed to Emmaus Lutheran Church in Kennard, NE or to the Washington County Food Pantry. At the Families request, masks are required. A live stream of the visitation can be found on the Campbell Aman Funeral Home Facebook page during visitation hours. https://www.facebook.com/campbellaman

The family of Walter Hans Japp Jr. created this Life Tributes page to make it easy to share your memories.

Send flowers to the Japp family.