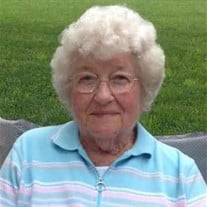 Vivienne Warrick, age 90, of Blair, passed away Monday, June 19, 2017 at her home. Funeral services will be held at 10:30 AM Wednesday, June 21, 2017 at Country Bible Church in Blair. Burial will follow at the Blair Cemetery. Visitation will be held Tuesday at Campbell Aman Funeral Home with family receiving friends from 6 to 8 PM. Vivienne Lorraine Warrick was born on July 21, 1926 in Blair, NE to Ernest and Hermine Kubie. She was raised in Blair and graduated from Blair High School in 1946. She married Harland “Hap” Warrick on October 1, 1950. After the wedding, the couple made their home on the Warrick family farm until 1954 when they moved to their current residence south of Blair. Their home served as the meeting spot for the Warricks. The farm was adorned with all of Vivienne’s passions: flowers, gardens, rolling lawns, chickens, and most importantly, her family. She was hostess to multiple birthday parties, weddings, holiday gatherings, wiener roasts, and Sunday dinners. If you stopped by the Warrick place on a Saturday morning you would be treated to one of her famous pecan cinnamon rolls. She is survived by her children: Bob (Ruth) Warrick, Susie Warrick, Cheryl (Saylor) Clements, John (Marlene) Warrick, daughter-in-law Teri Warrick Otte all of Blair, and son Gordon Warrick of Valentine, NE; grandchildren: Laurie, Carie, Heath, Ryan, Greg, Matt, Katie, Morgan, Colin, Maggie, Heath, Olivia and Jared; 19 great grandchildren; brothers Reynold and Richard Kubie and sister Isabelle (Gene) Thomas. She was preceded in death by her husband Hap, son Richard and brother Meredith Kubie.

Vivienne Warrick, age 90, of Blair, passed away Monday, June 19, 2017 at her home. Funeral services will be held at 10:30 AM Wednesday, June 21, 2017 at Country Bible Church in Blair. Burial will follow at the Blair Cemetery. Visitation will... View Obituary & Service Information

The family of Vivienne Lorraine Warrick created this Life Tributes page to make it easy to share your memories.

Send flowers to the Warrick family.