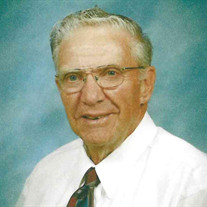 Virgil Wrich 85, of Blair Passed on October 6th, visitation will be held Friday beginning at 4pm at Campbell Aman Funeral Home with family receiving friends from 6-8 pm. Services will be Saturday October 10th at First Lutheran Church in Blair at 10 a.m. Virgil Wrich was born on April 1, 1930 on the family farm close to Kennard, NE to Harry and Helen (Hansen) Wrich. He was baptized at Grace Methodist Church in Kennard and confirmed at St. Johns Lutheran church in Bennington. Virgil grew up learning farming and being involved in 4-H clubs. He attended Blair High School, graduating in 1947. Virgil enlisted in the U.S. Army in January, 1951, receiving his basic training in Fort Campbell, Kentucky. He served on Active Duty in Korea, receiving a bronze service star, and attained the rank of Staff Sargeant. He was honorably discharged in October of 1952. Upon returning from duty, Virgil married Shirley Backhuus on December 14, 1952. They eventually moved to a farm 3 miles south of Blair, NE, where they raised a daughter and three sons. After a short time working for Papio Soil District, Virgil started his own business of Wrich Construction Company doing dirt work for many dams, terracing, roads, and tree removal in the Washington County area. On weekends, there was truck driving with loads to Topeka. Virgil had several years involved in raising lambs and feeding out sheep, his "little woolies". But, overall, he was working hard at farming, which he would continue to do to the end. Virgil, and Shirley, were active members of LICA (Land Improvement Contractors Association) and attended many conventions, some involving international travel. He was elected President of the Nebraska LICA for 1981 and 1982. Virgil was also a member of Washington County Feeders, First Lutheran Church of Blair, School Board Secretary of McCarthy School #29, and lifetime member of Disabled American Veterans. He was a member of the local VFW and American Legion. During his life, Virgil sponsored many girls softball teams and enjoyed traveling with the Fairway girls softball team. He enjoyed playing card games of Casino, 31, In-Between, and Liverpool Rummy, and also dealing Blackjack until late at night. Playing the game of Monopoly was also a part of winter days. Having tried his hand early on in racing stock cars (#82) in Arlington, NE, he would like to watch NASCAR on TV. Virgil is survived by his wife, Shirley, of 62 years. Also surviving is daughter Janet and Vern Kuhl of Bennington, and sons Gene and Deb Wrich of Bartlesville, OK, Roger and Lisa Wrich of Blair, and Brad Wrich of Blair. Grandchildren Amy and Jason Japp of Kennard, Adrienne and Scott Dutchuk of Omaha, Kelly and Michael Belsky of Apple Valley, MN, Cassie and Greg Stanzak of Tulsa, OK, Garrett Wrich, Margo Wrich, Sophia Wrich, Adam Wrich, McKenzie Wrich, Courtney Wrich, all of Blair, five great-grandsons, sister Jeanette Schneider, brother Bill and Joyce Wrich, sister-in-law Addie Backhuus, brother-in-law Tom and Dora Mae Backhuus, and numerous nieces and nephews. He was preceded in death by his parents, Harry and Helen Wrich, infant sister Nancy Wrich, infant granddaughter Liza Wrich, and brother-in-law Ray Schneider. Memorials may be directed to the Alzheimer’s Association, Gentiva Hospice or First Lutheran Church in Blair.

The family of Virgil Gene Wrich created this Life Tributes page to make it easy to share your memories.

Virgil Wrich 85, of Blair Passed on October 6th, visitation will...