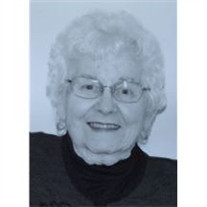 Sofia A. (Petersen) Sorensen, 95 was born on 2/27/20 in Bennington, NE to Emma Cornelius and John Petersen, the fourth of six children. Her father owned the Bennington Grocery Store where Sofia worked. She graduated from Bennington High in 1938 and worked in Omaha as a housekeeper and later as a telephone operator. She married Clarence Arthur Sorensen on March 9, 1941. They had three children: Clayton, Kathleen Severens, and Beverly Hartman. Together Clarence and Sofia made a farm life together in the Sorensen Dairy community in rural Douglas County north of Omaha. Sofia, as a farm homemaker supported Clarence's early farm and dairy. Sofia was the mother from heaven to her children, providing a beautiful natural environment filled with animals, play and work. She supported 4-H projects in sewing and livestock, and annual swimming lessons at Peony Park. She helped make sure that friends and family, on both sides of the family, had regular and ample time together through week-long summer exchanges with cousins. Clarence and Sofia enjoyed Saturday night dances at Peony Park. When her beloved husband died in 1989, she moved from the farm into Blair, and became a woman of strong independence and joyful spirit, carrying on with all the heart and soul of a saint. She was faithful to her church, First Lutheran in Blair, to her Extension and card clubs, and to her dear family. Her home on Wilbur Street was the ongoing site of birthday parties and holiday gatherings. In the last seven years, Sofia adapted to and adopted another new home as her health declined, the Crowell Nursing Home in Blair, NE. The care, love, and support from all the staff allowed her to continue to love her precious life with gratitude to all. The entire family will be forever grateful. Sofia is survived by her loving children Clayton and (Nancy) Sorensen of Greer, SC, Kathleen and (Gene) Severens of Annapolis, MD, and Beverly and (Dan) Hartman of Elkhorn, NE; her grandchildren George Brent Sorensen (and Holly) of Weatherby Lake, MO, Alexander Severens (and Lori) of Takoma Park, MD, and Anna Olga-Marie Severens of Sparks, NV, Darren Hartman (and Ethel) of Elkhorn, NE, and Adam Hartman (and Kristine) of Canon City, CO; and her great grandchildren Corbin, Cade, Aiden, Ethan of MO, Taylor, Corrine, Rivers, and Landon of SC, Soren and Thea of MD, Sofia and Finn of NE and Stella and Oscar of CO. She is also survived by her sister Ruby Nielsen of Omaha and many extended nephews and nieces on the Petersen, Sorensen, and Clausen sides of the family. Funeral services will be at First Lutheran Church, Blair, NE, on Wednesday July 1, 2015 at 11:00 AM

Sofia A. (Petersen) Sorensen, 95 was born on 2/27/20 in Bennington, NE to Emma Cornelius and John Petersen, the fourth of six children. Her father owned the Bennington Grocery Store where Sofia worked. She graduated from Bennington High in... View Obituary & Service Information

The family of Sofia A. (Petersen) Sorensen created this Life Tributes page to make it easy to share your memories.