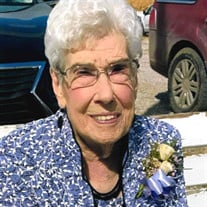 Shirley Eileen (Backhuus) Wrich, age 91 of Blair, passed away December 27, 2020 at her home. Public visitation will be held Sunday, January 3, 2021 at Campbell Aman Funeral Home beginning at 3:00PM, with family receiving friends from 6:00 to 8:00PM. Private services will be held. Shirley Eileen (Backhuus) Wrich was born on August 28, 1929 on the Backhuus family farm outside of Bennington, Nebraska to Peter and Pearl (Sumner) Backhuus. She was baptized at Kountze Memorial Church in Omaha and confirmed at St. John’s Lutheran Church in Bennington. She attended Bennington Public Schools and Graduated at the age of 16. Shirley worked for Mutual of Omaha in Omaha for six years before getting married. She lived with her sister Evelyn in town so she could carpool a ride to Mutual. She married Virgil Wrich on December 14, 1952 at St. John’s Lutheran Church in Bennington. They lived outside of Bennington for a while, then bought a farm three miles south of Blair. They raised one daughter and three sons there. Shirley worked at home, running the kids to McCarthy School and then later to Blair. After the kids were all grown up and gone, she decided to start working again. She started by doing flower deliveries for Country Gardens in Blair. She then went to B&C Store, Buttons and Bows, Ladies Fashions, and finally finished with 11 years at Blair West Pharmacy. She loved getting those paychecks! Shirley kept busy cooking meals for family while the kids were growing up. She made meat, potatoes, vegetables, and dessert every night. She enjoyed having the families on weekends when there were grandkids. Preparing large meals was the only way she knew how to cook. Later in life, it got too much, so the family all brought something to share. Shirley’s main passion was cookbooks. She has cookbooks and recipes cut out of the newspaper or magazines all over the house. She would have Janet go online to print off a recipe after watching a cooking show just because “she might want to make it someday”. She just loved recipes! Shirley was a longtime member of McCarthy Extension Club, even after the school closed down. She did volunteer work at the Blood Bank and for the elections. Shirley and Virgil were active member s of the LICA (Land Improvement Contractors Association) and attended many conventions, some involving international travel. She was also an active member of First Lutheran Church in Blair. Shirley and Virgil sponsored many girls softball teams and enjoyed traveling with the Fairway girls softball team. Shirley enjoyed playing cards. The entire family would play Casino (card game) after supper on the living room floor to see who had to do dishes. She didn’t really like playing because she was always one of the first two people out and had to do them anyway. Once in a while, she did win a couple of games. Shirley is survived by her daughter Janet and Vern Kuhl of Omaha; sons Gene and Deb Wrich of Bartlesville, OK, Roger and Lisa Wrich of Blair and Brad Wrich (Friend Juli Morrow) of Blair; grandchildren: Amy and Jason Japp of Kennard, Adrienne and Scott Dutchuk of Omaha, Kelly and Michael Belsky of Lakeville, MN, Cassie and Greg Stanzek of Jenks, OK, Garret Wrich (friend Alisha Beers) of Pisgah, IA, Margo Wrich, Sophia Wrich, Adam and Katie Wrich, McKenzie and Colton Harper, and Courtney Wrich (fiancée Justin Grabbe) all of Blair; seven great grandsons, and one great granddaughter; brother Tom Backhuus of Council Bluffs, IA; sister-in-laws Jeanette Schneider, Joyce Wrich and Addie Backhuus. Numerous nieces and nephews. She was preceded in death by her husband Virgil, parents Peter and Iva Pearl Backhuus, infant brother Warren, brother Pete Jr., brother-in-laws Ray Schneider and Bill Wrich, sister-in-law Dora Mae Backhuus; infant granddaughter Liza Wrich. Memorials may be directed to Frist Lutheran Church of Blair, ProMed Care of Blair or Fremont Methodist Hospice in Fremont.

The family of Shirley Eileen Wrich created this Life Tributes page to make it easy to share your memories.