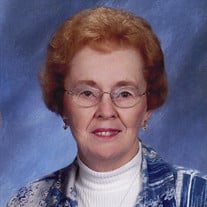 Shirley Jipp age 91 of Blair passed away April 24, 2019 at Good Shepherd Lutheran Community in Blair. A Celebration of life will be held at 9:30AM Friday May 3, at The Blair Congregational United Church of Christ. Graveside services will follow the luncheon at the Fort Calhoun Cemetery. Visitation will be held Thursday May 2, with family receiving friends from 5:00 to 8:00PM Shirley was born on August 9, 1927 at Ericson, Nebraska to Gilbert S and Adala (Peterson) Baker. After attending a one room rural school for 8 years near her home and 3 years of high school in Ericson, she graduated from school in Cedar Rapids, Nebraska. She later taught school in Wheeler County for 4 years. In between teaching she attended Kearney State Teachers College for one year and 3 summers. After her school years, she moved to Omaha and was employed for 5 years as assistant cashier at Fidelity & Deposit Bonding Company. On August 27, 1955, Shirley was united in marriage to Edwin Jipp, Jr. of Blair. To this union were born Ellen Sue McGovern of Omaha, Paul Edwin Jipp of Blair, and Martin Baker Jipp of Paris, Illinois. In May 1970, Shirley graduated from a 3-year correspondence writing school. Still vividly remembering stories of her childhood and the depression years, Shirley published over 70 short stories and articles. Her book, “Sand Beneath My Shoes” was published in 2005. A highlight of her publishing days was attending the Billy Graham School of Christian Writing for several summers. She is survived by her 3 children and 4 granddaughters Natalie and Mary McGovern, Sidney and Morgan Jipp, and grandson Jack McGovern, daughter-in-law Debra Jipp, son-in-law Mark McGovern, one sister Corinne Howe of Kearney, two brothers Dr. George Baker of Ord and Stuart Baker of Wahoo, two sisters-in-law Linda Baker and Margaret Rohwer Goltermann, and brother-in-law Russell Howe. Plus, a host of nieces, nephews and cousins. She was preceded in death by her loving husband Edwin Theodore Jipp, sister-in-law Lillian Baker, brothers-in-law Carl Goltermann and Edward Williams and her parents. Memorials may be directed to the Blair Congregational United Church of Christ.

Shirley Jipp age 91 of Blair passed away April 24, 2019 at Good Shepherd Lutheran Community in Blair. A Celebration of life will be held at 9:30AM Friday May 3, at The Blair Congregational United Church of Christ. Graveside services will follow... View Obituary & Service Information

The family of Shirley E. Jipp created this Life Tributes page to make it easy to share your memories.

Send flowers to the Jipp family.