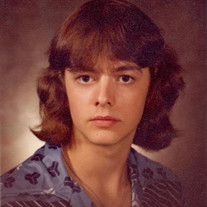 Scott was born May 14, 1963 in Council Bluffs, Iowa, a surprise addition to the family of John and Patrina (Ferrarello) Derry. The family moved to Blair, Nebraska two years later where Scott eventually attended Blair schools and subsequently graduated from Blair High School. Scott worked for his dad, a manager at Harold’s in Blair, throughout high school, was artistic and attended an Omaha art school after graduation. He held a passionate interest in music and played guitar for a local band for several years. He continued his artistic and musical interests and involvement throughout his life. Later, Scott formed a special bond with Father Dan Galas of St. Francis Borgia Catholic Church and received the Sacraments of Baptism, Holy Communion, and Confirmation into the Church. Scott is preceded in death by his parents, John and Pat, and his brother, Greg. He is survived by his special friend, Irene Kay Inman, their cat, Shadow, his sisters, Connie and partner, Patrick Flynn, Cindy Dobosz (Ron), brother John (Laurel), nephews, Ian, Kellen, and Cameron Derry, nieces, Carlie and Kylie Derry, former sister-in-law, Judy Milledge, and numerous aunts, uncles and cousins. Scott passed away September 23, 2020. Visitation will be held Monday, September 28 from 6 to 8 PM at Campbell Aman Funeral Home in Blair with a prayer service at 7 PM.

The family of Scott Cooper Derry created this Life Tributes page to make it easy to share your memories.

Send flowers to the Derry family.