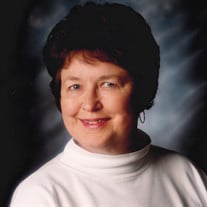 Ruth Ellen McKay, 80 of Blair, passed away January 21, 2020. Memorial services will beheld Saturday, January 25 at 10:30 AM at First Lutheran Church in Blair. Ruth Ellen (Brosseth) McKay was born to Elmer Albert and Grace Viola (Walker) Brosseth on March 7, 1939 at home in Farmington, Minnesota. She attended school in Farmington; graduating from Farmington High School in 1957. She attended Winona State college, Winona, Minnesota; graduating in 1960 with BS degree in Education with a major in English and a minor in Social Studies. Ruth married James Lee McKay on August 13, 1960 in Farmington, Minnesota. They had two daughters, Kristine Lee and Kimberly Ellen. Ruth began teaching in Missouri Valley, Iowa in 1960 while Jim attended Dana College. She then taught Freshman English at Blair High School from 1962 – 1968. Ruth began involvement with Girl Scouts in 1968. She was a Troop Leader, Day Camp Director, Resident Camp Director and held many other positions within the Prairie Hills Girl Scout Council in and around Blair. She loved all her Girl Scouts and all the fun times she had with them. In 1976, Ruth started working for OPPD at the nuclear plant in Fort Calhoun. Ruth retired from OPPD in 2010. Ruth enjoyed traveling. Her favorite place to travel was Prince Edward Island, Canada, the home of her favorite literary character, Anne of Green Gables. Ruth Ellen was baptized and confirmed in Farmington Lutheran Church, Farmington, Minnesota, and is now a member of First Lutheran Church in Blair where she served on the Social Concerns Committee. Ruth was preceded in death by her parents and her husband, Jim. She is survived by sister, Carol Ann Sheffer and brother, Allen (Kayce) Brosseth, daughters Kristine Lee (Ricky) Gates and Kim (John) Laws, and grandchildren Jeremy Cardoza, Dr. Payton Laws and McKeon Laws; and nieces and nephews. In lieu of flowers, the family requests memorials to Memorial Community Hospital for upgrades to the Oncology infusion lab at the Blair Hospital.

The family of Ruth Ellen McKay created this Life Tributes page to make it easy to share your memories.

Send flowers to the McKay family.