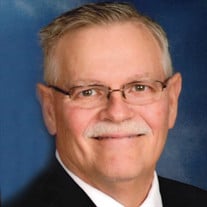 Royce Eldon Sperry age 67 of Blair, passed away October 16, 2017 at Methodist Hospital in Omaha, NE. Mass of Christian Burial will be held Friday, October 20, 2017 at 10:00 AM at St. Francis Borgia Catholic Church in Blair. Visitation will be held Thursday from 6 to 8 PM with a Vigil at 7 PM at St. Francis Borgia Catholic Church in Blair. Royce Eldon Sperry was born on March 14, 1950 in Lincoln, Kansas the son of Dwight and Alma Sperry. He attended school at Beverly and Lincoln, Kansas schools. He graduated in 1968 and then attended NCK Vo-Tech School, Kansas State and Texas A&M. he was united in marriage to Carol Muths on November 15, 1969 in Tipton, Kansas. In 1972 he began his career with the USDA. He was employed with them for 35 years until his retirement. After his retirement from the USDA he started his own consulting business, Regulatory Essential Specialists. Royce enjoyed woodworking, traveling, golf, hunting and especially spending time with his family. Royce was a proud patent holder with his brother-in-law Lanny for an invention. He enjoyed fellowship with the Kiwanis and the Knights of Columbus. Royce will be remembered for his quick wit and open arms. He is survived by his wife of 47 years Carol Sperry of Blair; daughter Jennifer (Jason) Nelson of Omaha; three grandchildren: Aaron, Laurel and Maggie Nelson; siblings: Carolyn (Robert) Roth of Great Bend, KS, Arletta (Lanny) Morse of Lincoln, KS, Roger (Karin) Sperry of Southlake, TX, Ron (Sharon) Sperry of Harris, MN; sister-in-law Yvonne (Ron) Strecker of Ellinwood, KS; brothers-in-law: Lyle (Annette) Muths of Tipton, KS and Stan Muths of Blair, NE; many nieces and nephews and special family friend Benedicte (Frederic) Bobin and family of St. Avertin, France. He was preceded in death by his parents Dwight and Alma Sperry, sister Marilyn and infant twin brothers. Memorials may be directed to the American Heart Association or the Methodist Hospital Cardiac Unit.

Royce Eldon Sperry age 67 of Blair, passed away October 16, 2017 at Methodist Hospital in Omaha, NE. Mass of Christian Burial will be held Friday, October 20, 2017 at 10:00 AM at St. Francis Borgia Catholic Church in Blair. Visitation will be... View Obituary & Service Information

The family of Royce Eldon Sperry created this Life Tributes page to make it easy to share your memories.

Send flowers to the Sperry family.