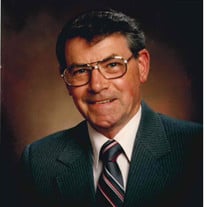 Roy E. Majors age 84 of Blair, died January 26, 2017 at Good Shepherd Lutheran Community in Blair. Funeral Services will be held Monday, January 30, 2017 at 10:00 AM at First United Methodist Church in Blair . Graveside services will follow at Forest Lawn Cemetery. Visitation will be held Sunday at Campbell Aman Funeral Home with family receiving friends from 6 to 8 PM. Roy E. Majors was born on February 13, 1932 in Omaha, NE, the son of Charles and Sylvia Majors. He was raised in Omaha and attended North High School. In 1953 he married Marilyn Hansen and had five children. In 1954 he joined the United States Army and served in Korea. In 1956 he was honorably discharged from the Army. After returning from the Army he worked in metal manufacturing as a plant manager until his retirement in 1994. In 1983 he was united in marriage to Michelle Campbell in Kennard, NE. the couple enjoyed traveling, golfing, woodworking, and spending time with their grandchildren. He was a member of the Ralston American Legion and the Blair Fraternal order of Eagles. He also had a passion for racing pigeons and was a member of the Omaha Racing Pigeons Association. Roy always found time to arrange family holidays; the fourth of July was his favorite holiday to get the family together. Roy’s grandchildren will always remember Halloween with grandpa and his converted basement into a haunted house, and the grandchildren’s travels to Ooga-Booga Land with “Injun Joe”. Roy is survived by his wife Michelle of Blair; children: Ricky Majors of Fremont, Rhonda Nelson of Kennard, Robin and Steve Andreasen of Kennard, Renelle Cucinello of Kennard; brother Bob and Jan Majors of Mt. Vernon, IA; siblings-in-law: Kevin and Cathy Campbell, Kent Campbell, Angela Campbell, Andrea Campbell, Tricia and Mark Thibodeau; grandchildren: Jennifer Clayton, Shannon Majors, Kristen Nelson, Brett (Kaci) Nelson, Roxanne (Aaron) Knobbe, Michael Andreasen, Chris Andreasen, Trevor Cucinello; great grandchildren: Aubrey, Ryker, Logan, Alexis, Jaxon, Oliver, Honora, Kaitlyn, Hannah, Kennedy, Gavin and McKinley. Roy is preceded in death by his parents Charles and Sylvia Majors, son Rodney Majors and brother Ralph Majors. Memorials may be directed to Good Shepherd Lutheran Community.

The family of Roy E. Majors created this Life Tributes page to make it easy to share your memories.

Send flowers to the Majors family.