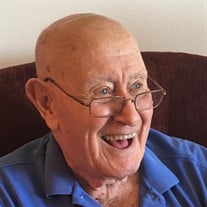 Roscoe “Rocky” B. Wood age 93 of Blair, passed away April 13, 2017, at Shepherds Village in Blair. Visitation will be held Monday, April 17, 2017, from 5 to 8 PM with a Masonic service at 7 PM at Campbell Aman Funeral Home. Memorial services will be held Tuesday, April 18, at 10:30 AM at First Lutheran Church in Blair. Private inurnment will be held in West Point, Nebraska. Roscoe “Rocky” Wood was born on December 11, 1923, in Chicago, Illinois to Harold and Margaret (Vest) Wood. He attended school in Lombard, IL and later joined the Coast Guard at the age of 17. He met Lois Anderson during WWII when they were both in the military; he was her patient and she was his nurse. The couple was married on July 1, 1946, in Lombard, IL. As newlyweds, they lived by Wrigley Field. They later moved to West Point, NE in 1956 and took over the Anderson Family Farm. In 1968 the family moved to Elkhorn, NE and then on to Blair in 1972. After retiring, Rocky and Lois traveled and enjoyed their life together. They were presently residing at Shepherds Village in Blair. Rocky was a member of the Masonic Lodge for 70 years and was holder of the Bronze Jordan Medal for the Masonic Lodge in Blair; the Jordan Medal is awarded to the member of the lodge with the most years of unbroken service. Rocky was an avid Cubs fan. He loved telling stories, working the daily jumble and crossword puzzles in the newspaper, and singing. He never missed a chance to wish someone happy birthday with his special birthday song. Rocky is survived by his wife Lois; children: Charles “Chuck” (Janet) Wood of Omaha, Jean (Paul) Hundtoft of Blair; grandchildren: Beth Wood, Laura Wood, Tony (Jen) Hundtoft, Anna (Ryan) Costella, John (Courtney) Hundtoft, Allison Wood; great grandchildren: Brantley and Tristan Goos, Mackenzie Kemp, Gavin, Charlie, and Wyn Wood, David Harris, Anderson Hundtoft and Dania Costella. He is preceded in death by his sister Margaret, son and daughter-in-law John and Ruth Wood and grandson Nathan Wood. Memorials may be directed to First Lutheran Church, Blair and to the Shriner Transportation Fund.

The family of Roscoe "Rocky" Byron Wood created this Life Tributes page to make it easy to share your memories.