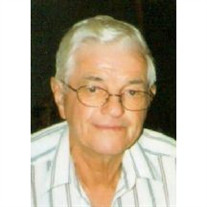 Ronald Carl Ashland, age 91 of Blair, Nebraska died July 9, 2015 at Memorial Community Hospital in Blair, Nebraska. Funeral services will be held Thursday July 16, 2015 at 10:30AM at First Lutheran Church in Blair, Nebraska. Burial will follow services in the Blair Cemetery. Visitation will be held Wednesday July 15, beginning at 4:00PM with family receiving friends from 6:00 to 8:00PM that evening at Campbell Aman Funeral Home in Blair. Ronald C. Ashland was born on August 30, 1923, in Clear Lake, IA, to John and Eva Ashland, a German farming family. He attended Clear Lake High School and graduated with the class of 1942. He enlisted in the US Air Corp in 1944 and was Pilot and Bombardier trained. Ron was honorably discharged from the military in 1945. After serving in the Military Ron attended Waldorf College, where he was elected Student Body President, played football, and was instrumental in forming the Golden Gloves Boxing Team. On August 14, 1949 he was united in marriage to Betty A. Mann in Clear Lake, Iowa. Ron was employed with Farmers National Company and managed farms in the Midwest. He was an American Legion member, avid reader of history and westerns, and noted public speaker often known for his portrayal of “Sad Sack” and “Mayor of Kickapoo.” He could repair almost anything mechanical and was known for being the bike repairman in Blair. Ron will be remembered most for being a devoted father and grandfather. Family was always a priority to Ron, and he enjoyed spending much of his time involved in family activities. He was preceded in death by his son Randall Ashland, wife Betty Ashland, brothers; Arthur Ashland and Albert Ashland and his parents John and Eva Ashland. Ron is survived by his brothers; Wayne (Joan) Ashland of Clear Lake, IA and John Jr. (Barbara) Ashland of Minneapolis, MN; daughter in law Bev (Kevin) Willis of Blair,Ne; four grandchildren, Ivy (Will) Linger of Omaha, NE, Lee Ashland of Omaha, NE, Luke Ashland of Blair, NE, and Tanner Ashland of Blair, NE, three great granddaughters Bailey, Josslyn and Eva Linger, as well as nieces and nephews. Memorials may be directed to Memorial Community Hospital or The Blair Rescue Squad in Ron’s name.

The family of Ronald Carl Ashland created this Life Tributes page to make it easy to share your memories.

Send flowers to the Ashland family.