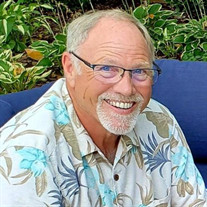 Roger Daniel Rebarchek was born in Scottsbluff, Nebraska on November 26, 1957. Roger was the firstborn child of George Daniel Rebarchek and Myrna Joan Roehl Rebarchek. A year after he was born the family moved to Dighton, Kansas. The family grew to include his sister Tena and three brothers Larry, Bruce, and Jack. Roger attended Dighton Schools through 7th grade. He went to Garden City Junior High for 8th grade, and then Enterprise Academy for grades 9-12. He participated in multiple activities such as baseball, basketball, football, and track. He played tenor saxophone in the band, and was a member of 4-H, and Pathfinders. Roger shared two children, Nathan and RaeLea, from his first marriage to Mandy Withrow. Roger spent many years in Kansas City working construction, specializing in drywall and residential painting. In recent years he worked as a semi-truck driver. He loved people and would spend the long hours on the road catching up over the phone with family and friends. During his time in Kansas City, Roger was a member the Chapel Oaks and New Haven Seventh-day Adventist Churches. He enjoyed riding motorcycles and joined Sabbath Keepers Motorcycle Ministries. He also participated in men’s groups at church where he made lifelong friendships. When he moved to Nebraska, he attended the Freemont Seventh-day Adventist Church where he served as a deacon and assisted in the children’s Sabbath School program. In 2014 Roger attended his high school reunion where he got reacquainted with a former classmate, Judy Lynn Miers. They quickly fell in love and were married on December 28th of that year. He and Judy lived together in Herman, Nebraska. In 2016 Roger became a grandfather to Nathan and Jennifer’s son, Alexander Daniel Rebarchek. He was excited when RaeLea and Zach added another grandson to the family when Ellison Pedro Ray Frishman was born. Roger was known for his infectious smile, but it was never bigger than when he was with his grandsons. When he came to visit, he always brought presents to spoil the boys. Roger was preceded in death by his grandparents, Fred and Lydia Roehl; Amil and Carrie Rebarchek; and his beloved mother Myrna. Roger is survived by his wife Judy Rebarchek; father George Rebarchek; son Nathan (Jennifer); daughter RaeLea Frishman (Zachari); grandsons Alexander and Ellison; siblings Tena (Ken) Stoppel, Larry (Ann) Rebarchek, Bruce Rebarchek, Jack (Jamie) Rebarchek; as well as many aunt, uncles, nieces, nephews, and friends.

Roger Daniel Rebarchek was born in Scottsbluff, Nebraska on November 26, 1957. Roger was the firstborn child of George Daniel Rebarchek and Myrna Joan Roehl Rebarchek. A year after he was born the family moved to Dighton, Kansas. The family... View Obituary & Service Information

The family of Roger Daniel Rebarchek created this Life Tributes page to make it easy to share your memories.

Roger Daniel Rebarchek was born in Scottsbluff, Nebraska on November...

Send flowers to the Rebarchek family.