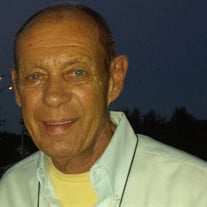 Robert L. Widener, (Bob) age 72 of Key West, Florida passed away Friday, October 16, 2015 at Mt. Sinai Hospital in Miami, Florida. Services will be held Saturday, October 31st at 2:30 pm at Bethany Lutheran Church in Lyons, Nebraska. Visitation will be Friday, October 30th from 4-8 PM with family present from 5-8 PM at Campbell Aman Funeral Home in Blair. Robert L. Widener was born April 22, 1943 in Blair, Nebraska to Howard and Alma (Swanson) Widener. He attended country school at Hill Creek and graduated from Herman High School in 1960. Following high school Robert went on to attend college at Wayne State College in Wayne, Nebraska. There he received his bachelor’s degree in business and minored in music. After graduation from Wayne State in 1965 he moved to Lyons, Nebraska and it was there that he pursed his one great passion and talent. Robert began his career as a music teacher for Lyons public schools. Mr. Widener was the greatest music teacher,” said a former student, “He always had a smile, always greeted you with kindness. As a teacher, he pulled out the best in all his students.” Bob touched many with the power of music. Outside of teaching, he shared his musical talents as organist of two churches in the community as well as playing for many special events. Following retirement in 1995, Bob moved to Key West, Florida. He continued to actively share his love of music with churches and special events in the Key West community. Even after retirement he spent his days playing for Curry Mansion, a local Key West Bed and Breakfast. Bob was a very kindhearted and special person, who made everyone feel like his good friend. He is survived by his sister, Mary Snow of Blair, sister-in-law, Shari Widener of Tekamah, nieces Marcie Reed of Blair, Jill Bitter of Herman, nephew Darren Snow of Nebraska City as well as six great-nieces and six great-nephews. He was preceded in death by his parents Howard and Alma Widener, his brother Kenneth Widener and nephew Timothy Widener.

The family of Robert L. Widener created this Life Tributes page to make it easy to share your memories.

Send flowers to the Widener family.