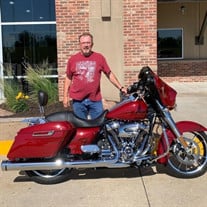 Ricky Duane Scott, age 62 of Blair, passed away May 7, 2022 at his home in Blair, surrounded by his wife and family. Memorial services will be held Monday May 16, 2022 at 10:00AM at Northern Lights Venue, 310 N 14th Street, Fort Calhoun, Nebraska. Military graveside services will follow in the Blair Cemetery. Visitation will be held Sunday, May 15 from 5:00 to 7:00PM at Campbell Aman Funeral Home in Blair. Rick was born on April 25, 1960 in Blair, the son of Lawrence and Berniece (Guy) Scott. Rick was raised in Blair and graduated from Blair High School. In 1978 at the age of 17 he enlisted in the United States Navy along with his brother Clinton. While serving in the Navy he met Connie Flores, and the couple later married on March 8, 1980. Rick and Connie moved back to the Blair Community where they would raise their family. Rick worked for his grandparents at Wattenbarger Appliance, before starting his 38 year career with Johnstone Supply. Rick lived for his family, his grandchildren and riding his Harley. He is survived by his wife Connie, sons; Antonio, Steven (Megan) and Daniel, grandchildren; Gavin, Angelique, Wyatt and Eastyn, brothers; Clinton (Eva) Scott and Mike (Deb) Scott, sister Brenda (John) Christoffersen, stepmother Mary Scott, along with many nieces, nephews, extended family and friends. He was preceded in death by his parents. Memorials may be directed to the Washington County Community Foundation earmarked for the Blair Veterans Tribute Plaza. Campbell Aman Funeral Home in Blair is in charge of arrangements.

The family of Rick D. Scott created this Life Tributes page to make it easy to share your memories.

Send flowers to the Scott family.