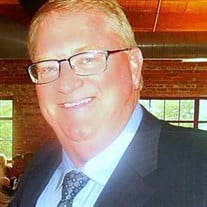 Richard Allen Plugge, 63, of Blair, died July 22, 2016 at his home, surrounded by family after a long battle with brain cancer. A memorial service will be held Wednesday, July 27, 2016 at 11:00 AM at First Lutheran Church in Blair. Following the service, a time of gathering will be held at the Blair American Legion. Visitation will be held Tuesday, July 26, at Campbell-Aman Funeral Home beginning at 2 PM with family receiving friends from 6 to 8 PM. Richard Allen Plugge was born on October 25, 1952 in Omaha to Robert and Ellenora (Jensen) Plugge. He attended Blair Community Schools where he was a standout athlete and record setter in multiple sports. He graduated from Blair in 1971. Following graduation, Rick received a football scholarship to the University of Northern Colorado. He later transferred to Dana College where he graduated in 1977. In 1981 he married Patty Rogert at First Lutheran Church in Blair, and they were blessed with two boys, Hank and Max. Rick spent 34 years working for Huntel Engineering before retiring in 2014. Rick and his family loved spending time in Okoboji in the summer. Rick had a passion for football, especially the Huskers and the Packers; he also loved Creighton basketball and playing golf. Rick “Sluggo” made friends everywhere he went, and made so many people feel special. His favorite line was “Love and Hug those around you.” Rick is survived by his wife Patty of Blair, sons Hank (Malissie) of Omaha, Max of Blair; Mother Ellenora Plugge; brothers Roger (Juli) Plugge and Randy Plugge of Blair; sister Rita (Tony) Christensen of Omaha; very special friends Tom and Angela Triplett, Jessica and Becca; sisters-in-law Angie (Bob) Brickson of Leawood, Kansas, Sally (John) Schroder of Fort Collins, Colorado, Jill (Phil) Tobin of Des Moines, Iowa, and Joanie and Suzanne Rogert of Omaha; several nieces, nephews and many beloved friends. He was preceded in death by his father Robert Plugge, Father-in-law Emmett Rogert and Mother-in-law Betty Rogert. Memorials may be directed to the Blair Family YMCA or Brain Cancer Research at UNMC.

Richard Allen Plugge, 63, of Blair, died July 22, 2016 at his home, surrounded by family after a long battle with brain cancer. A memorial service will be held Wednesday, July 27, 2016 at 11:00 AM at First Lutheran Church in Blair. Following... View Obituary & Service Information

The family of Richard Allen Plugge created this Life Tributes page to make it easy to share your memories.

Send flowers to the Plugge family.