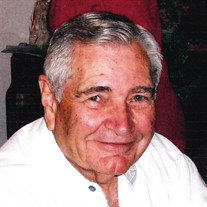 Richard “Dick” Leth Nielsen, 84 of Blair, passed away June 27, 2019 at his home. Services will be held at 11:00 AM Wednesday, July 3, 2019 at Campbell Aman Funeral Home. Graveside services will follow in the Blair Cemetery. Visitation will be held from 6 to 8 PM, Tuesday, July 2 at Campbell Aman Funeral Home. Richard Nielsen was born on December 14, 1934 on a farm west of Fort Calhoun, Nebraska, known as Pioneer Hills. He was the son of Leth J. Nielsen and Dorothy (Jones) Nielsen. He lived and helped on the farm along with his brother George Ryan and his sister Janet (Nielsen) Davis. He was preceded in death by his wife Marge, after 57 years of marriage, his parents Leth and Dorothy Nielsen and his brother George Ryan. Dick attended Long Creek School and later Blair High School, graduating in 1952. After graduation he attended Dana College. On December 11, 1954, he married Margaret J. Surber. They had four children: Susan, Rick, Mary and Dan. Dick worked for Kelly Ryan Equipment Company and later worked for Western Electric Company, which was later taken over by AT&T. He remained on this job and was promoted to a management job for 25 of his 32 years with the company. After retirement, Dick and Marge traveled extensively and managed to see most of the United States, including numerous trips to Hawaii. Dick and Marge were married for 57 years before her passing. They had a loving marriage and love their children and families very much. A note written by Marge shortly before her passing: “Dick was a wonderful husband, father and grandfather. The children and grandchildren could talk to him about anything, if they had any problems, he would always help them if he possibly could. Throughout our marriage, Dick had many friends. If any of them needed help, he was always there for the, never asking anything in return. He was a true family man and a friend. He always hoped to be remembered as a good son, husband, father, grandfather and a good friend. He surpassed all of theses goals. We all loved him very much.” Dick was a retired member of the Blair Fire and Rescue Squad, a charter member of the Blair Eagles Club and he was a long time member of the Masonic Lodge. Dick is survived by his children: Susan (Jeff) Thompson of Kansas City, MO, Rick (Susan) Nielsen of Blair, Mary Donner of Blair and Dan Nielsen of Blair; sister Janet Davis of Honolulu, HI; brother-in-law Frank (Diane) Surber of North Las Vegas, NV; sister-in-law Kay (Jim) Woodard of Blair; eight grandchildren; 15 great grandchildren and two great great grandchildren as well as many nieces and nephews.

The family of Richard "Dick" Leth Nielsen created this Life Tributes page to make it easy to share your memories.