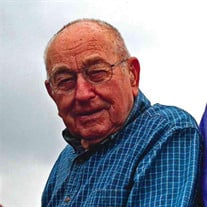 Reynold (Ren) Theodore Kubie, age 92, of Blair Nebraska passed December 27, 2017 at UNMC surrounded by family. Memorial services will be held Tuesday, January 2 at 10 AM at Grace United Methodist Church in Kennard. Visitation will be held Monday from 5 to 7 PM at Campbell Aman Funeral Home. Ren was born May 25, 1925 to Ernest and Hermine (Ollerman) Kubie in Blair. He grew up in the Blair area, attending Pleasant View Country School through the eighth grade. He worked for many of the area farmers and was always grateful for the opportunity to work and the support many gave to his family. Ren served in the U. S. Army from 1945 to 1946 with the occupation forces in Japan as Technician 4th Grade (Sergeant). Ren was able to put his farming skills to work with his brother Richard purchasing a farm west of Blair they began farming full-time. On February 3, 1962 Patricia (Patty) Anne Olson and Reynold were married. They worked hard to build a successful family farm and raise their three boys. In addition to farming, Ren provided snow-clearing services for various Blair businesses and residences for several years. He also was one of the few providers of custom corn-shelling. The corn-shelling led to a partnership with his brother Richard to build a small trucking service. They hauled telephone cable reels from Omaha to Western Nebraska and metal bins and sheds between various locations. Ren stayed active with farming helping his son Jason. He was especially active during harvest and was still just as worried about getting the crops out as he had been during his own farming. Ren enjoyed bowling and card games with the boys. He was a frequent visitor to the local cafes and enjoyed talking shop. August often brought a slow period for farming which the family took advantage of. They would load up the pickup and drive to Washington and Oregon to visit Patty’s sister and family and especially enjoyed salmon fishing. Reynold enjoyed the drive across the states, especially through the mountains of Montana, Idaho and Washington. He was fortunate to repeat this trip with his family in 2017. Reynold is survived by his sons: Keith (Kim) Kubie of Edmonds, Washington, Jason (Kelly) Kubie of Blair, and Lowell (Chana) Kubie of Blair. Grandchildren: Grant of Blair, Sarah of Edmonds, Washington, Garet of Blair, Austin of Blair, Kara of Blair. Siblings: Isabelle (Gene) Thomas and Richard Kubie. Reynold was preceded in death by his wife Patty, daughter Diantha Kubie, sister Vivienne Lorraine Warrick and brother Meredith Joseph Kubie.

The family of Reynold Theodore Kubie created this Life Tributes page to make it easy to share your memories.

Send flowers to the Kubie family.