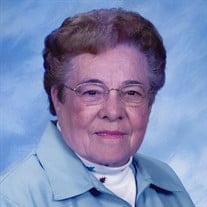 Phyllis R. Green, age 87 of Blair, passed away Jan 1, 2020 at Crowell Memorial Home in Blair. Services will be held Friday January 10 at 2:00PM at Campbell Aman Funeral Home in Blair. Graveside services will be held at a later date at St. Andrews Cemetery, North of Osceola, Nebraska. Phyllis was born in Osceola, Nebraska, the daughter of Leo and Pauline Kresha, on October 4, 1932. She was raised in Osceola and was a graduated from Osceola High School. In 1957 she moved to Blair and later married Lloyd “Skinny” Green. Phyllis worked in Blair at the Gamble’s store and then later for Huntel Communications and retired from Great Plains Communications. She was a member of the Blair American Legion Auxiliary and St. Francis Borgia Catholic Church in Blair. Phyllis enjoyed bowling, tending to her yard, and summers at Rush Lake in Minnesota. Phyllis is survived by her close friends, Ronald and Linda Madsen, nieces and nephews; Raymond, Gregg, Andy, Michelle, Chris, Tony, David, Don, Sharon and Karen, along with great nieces and nephews, friends and her loyal dog Gus. She was preceded in death by her parents, husband Lloyd, brothers; Glenn, Paul and Alan, niece Mary, and her dog Angel. Memorials may be directed to Blair Fire and Rescue.

The family of Phyllis R. Green created this Life Tributes page to make it easy to share your memories.

Send flowers to the Green family.