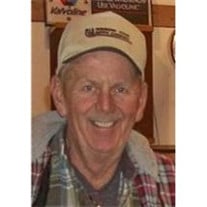 Paul Michael Jensen age 59 of Blair, died December 9, 2014 at Methodist Hospital in Omaha after a long battle with cancer. Funeral services will be held Monday at 10:30AM at Country Bible Church in Blair. Visitation will be held Sunday at Campbell Aman Funeral Home with family receiving friends from 6:00 to 8:00PM. Burial will be held at a later date in the Blair Cemetery. Paul M. Jensen was born on November 10, 1955 in Omaha, Nebraska to Ronald and Gloria (Thompson) Jensen. He was 1 of 6 brothers raised on the family farm. He attended March school and later graduated from Blair High School. On March 20, 1993 he was united in marriage to Shelly Siggins in Blair, Nebraska. He was employed with Huntel for 20 years and later Brakken Trucking. He also worked as an auctioneer’s assistant for Jensen Brothers Auctioneers for over 20 years. Paul was a talented and genuine handyman. He could repair nearly anything to work like new. He enjoyed working on and riding motorcycles, jeeps and snowmobiles, and taking road trips with his friends. He especially enjoyed his annual trip to Yankton with his brothers, a trip they have been taking since 1986. There are countless memories and stories that will continued to be shared between Paul’s family and friends for many years. He will be remembered as a true family man and being a good husband, father, son and brother. Paul is survived by his wife Shelly of Blair, son, Josh (Brooke) Jensen of Ashland, Ne, daughter Jennifer Jensen of Blair, mother Gloria Jensen of Blair, brothers; Thomas (Peggy) Jensen of Blair, William (Donna) Jensen of Blair, John (Debbie) Jensen of Blair, Phillip (Patty) Jensen of Blair, mother in law Barbara Siggins of Omaha, sister in law Vickey (Stan) Elsasser of Omaha, sister in law Betty Jo (Kelly) Peters of California, William Siggins of Kansas City, KS, Reggie (Ron Brezina of Texas and several nieces and nephews. He was preceded in death by his father Ronald Jensen, brother Jay Jensen and father in law Bill Siggins. Memorials may be directed to the family.

Paul Michael Jensen age 59 of Blair, died December 9, 2014 at Methodist Hospital in Omaha after a long battle with cancer. Funeral services will be held Monday at 10:30AM at Country Bible Church in Blair. Visitation will be held Sunday at Campbell... View Obituary & Service Information

The family of Paul M. Jensen created this Life Tributes page to make it easy to share your memories.

Send flowers to the Jensen family.