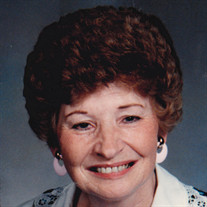 Patty L. Vosika, 86 of Papillion, passed away Monday, August 20, 2018 at Good Shepherd Lutheran Community in Blair, NE. Service will be held Saturday, August 25, 2018 at 11:00AM at Faith Presbyterian Church, 8100 Giles Road, LaVista, NE, with Rev. Lori Robinson officiating. Born in Texas on June 14, 1932 to Edward and Marie Huenink, Patty’s family moved to Firth, Nebraska before eventually settling in Lincoln. In 1950 she graduated from College View High School where she met the love of her life, Richard L. Vosika; they were married in 1951. In 1956 and 1959 their two children were born, Lynn Marie and Scott Thomas. Dick’s business moved them to Papillion in 1967 where Lynn became very involved in the band program and Scott played sports. Dick and Pat became familiar faces at all the sport and music activities and parent groups where they made many good friends. Patty became a member of many groups with her friends including bowling teams and the Papillion garden club. After Dick’s passing in 1996, Patty began to travel with her friends. They visited Europe, numerous states and of course always Husker games. A monster Husker fan, she and Dick had attended every home game that Lynn marched in at UNL and later, went to many with her gang. She would pace in front of the TV at home and would go so far as to tie a tea towel around her face, so she didn’t bite her nails! Even after she moved to assisted living, she would watch the games alone, so that others didn’t disturb her watching the game. Patty was a very active member of Faith Presbyterian Church. She participated for many years in the Chancel Choir, summer bible school, outreach with the elderly and served as a deacon. Patty is survived by her daughter Lynn (Steve) Sobota of Blair, son Scott (Deb) Vosika of Omaha; grandsons: Travis (Abby) Vosika of Omaha, Tyler Vosika of Kansas City, MO, Michael (Kadie) Sobota of Schuyler, NE and Stephen Sobota of Blair. Memorials may be directed to Faith Presbyterian Church or to the family.

The family of Patty L. Vosika created this Life Tributes page to make it easy to share your memories.

Send flowers to the Vosika family.