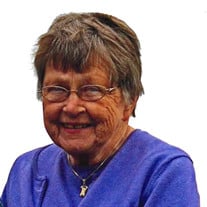 Patricia "Patty" Ann (Olson) Kubie age 79 of Blair, NE died on September 6, 2016 in Omaha at the Josie Hospice Harper House. A memorial service will be held at Grace United Methodist Church in Kennard, NE on Saturday, September 17th at 10 a.m. Lunch will follow in the fellowship hall. Burial will be in the Blair Cemetery following lunch. Visitation will be held at Campbell Aman Funeral Home on Friday, September 16th with family receiving friends from 6:00-8:00 p.m. Patty was born September 21st, 1936 in Blair, NE the daughter of Rufus & Ruth (Blodgett) Olson. She began elementary school in Iowa then the family relocated to Grant, NE and then back to Blair where Patty finished her schooling and graduated high school. Following high school, she attended Dana College and graduated with her bachelor's degree in physical education. Patty student taught P.E. at West School in Blair under the guidance of Mrs. Rose Ruzicka. While in college Patty enjoyed working with the Nebraska Tourist Office in Blair which was located on the corner of 19th and South street. On February 3, 1962 Patty and Reynold Kubie were united in marriage at First Lutheran Church in Blair, NE. The couple made their home on a farm west of Blair. Patty taught P.E. in Blair for one year before their oldest son Keith came along. The city girl learned the ways of the farm working side-by-side with Reynold. Together they built up their small family farm. Patty, taking on all sorts of chores from hauling seed, walking beans, feeding cattle and bringing in the harvest, she embraced the farm life and helped raise the next generation of farmers. She did all of this with a smile on her face and a twinkle in her eye. Besides the farm chores, she worked hard to keep the family fed and her three sons mostly in line, sending the boys outside when energy levels got high. Patty was always learning, she was always curious whether the topic was wildlife and wild plants or local history, and would engage in great conversations to learn more about anything that interested her. Patty enjoyed her garden, flowers and bird watching; her country home and her country life. She also enjoyed trips to the Oregon coast and the sound of the waves crashing on the beach. Patty is survived by her husband Reynold Kubie of Blair, sons Keith (Kim) Kubie of Edmonds, WA, Jason (Kelly) Kubie of Blair and Lowell (Chana) Kubie of Blair; 5 grandchildren Grant (20), Sarah (18), Garet (17), Austin (15) and Kara (11); sister Marilyn Johnson of Lebanon, OR and many nieces and nephews. She was preceded in death by her parents, daughter Diantha Kubie and brother-in-law Howard Johnson. In lieu of flowers memorials may be directed to the Washington County Historical Association or the Josie Harper Hospice House.

The family of Patricia "Patty" Ann Kubie created this Life Tributes page to make it easy to share your memories.

Send flowers to the Kubie family.