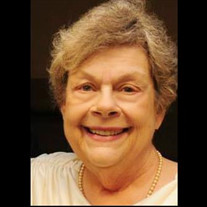 Patricia Ann (Harper) Hineline, 73 of Ft. Calhoun, Nebraska left this earth on Saturday, July 15th at Bergan Mercy Hospital in Omaha, NE after a brief battle with Idiopathic Pulmonary Fibrosis. Patricia was born to Gene and Doris Harper in Omaha on June 10, 1944. The family moved to Tuscon, AZ in 1957 and returned Nebraska to run the storehouse in Des Soto between Blair and Ft. Calhoun in 1960. The storehouse sat on the property of Virgil and Norma Hineline. The Hineline's oldest son, William and Patricia formed the beginning of a lifelong relationship. While in high school, Patricia lived in Blair with her Grandmother, Sylvia Fredricks. Upon graduation from Blair High School in 1962, Patricia attended Nebraska Christian College in Norfolk and received her degree in early childhood development. Upon graduation, William asked Patricia to be his bride and the couple were married January 9, 1965. They made their home in Alameda, California as William continued his career in the United States Navy. While in Alameda they welcomed the first son, Christopher, daughter Carmen and second son, Curtis. Carmen died in infancy due to heart complications. The couple moved to Millington, TN in where daughter Kimberly was born in 1972. They spent the remaining 5 years of Bill's career in Norfolk, VA before returning to the home-place in DeSoto in 1981. While in Virginia, Patricia worked for the Christian Broadcasting Network. She later worked for the Blair Housing Authority for many years. She especially enjoyed caring for the residence at Parkview Manor. Upon retirement from the Housing Authority she worked for Ron Hineline Insurance Agency. The couple's son Christopher passed away unexpectedly in 1999 and her love for her family continued to grow with the addition of 5 grandchildren and 1 great grandson. But her family in Blair was even larger with those who knew her referring to her as Grammy Pat. Everyone was special to her and she loved making people feel welcome. Known for her hospitality and birthday dinners, she was happy to serve not only her family but anyone who wanted to sit down at the table. She truly believed, “The more the merrier.” She was always active in the church she attended and loved to share the gift of music. She served as the church secretary at Ft. Calhoun Baptist Church and later was active in bible studies at Country Bible Church in Blair. She truly loved the Lord and often credited Him for the strength she found through the years as a military wife and with the loss of two of her four children. She is preceded in death by her parents, Gene and Doris Harper, her sister Carol Melson, her brother Clyde Harper, her daughter Carmen and son Chris. Survivors include: her husband Bill of rural Fort Calhoun, NE, son and daughter-in-law Curt and Shannon Hineline of Oakland, NE, daughter and son-in-law Kim and Brent Clark of Blair, NE, 5 grandchildren, and one great grandchild. She is also survived by her brother and sister-in-law Don and Ladonna Harper of Omaha, and sister and brother-in-law Lynn and Patrick Newman of Portland, OR. A Celebration of Life will be held on Wednesday, July 19th at 10:00 a.m. at Country Bible Church in Rural Blair. There will be no visitation. Pastor Glenn Hudson and Pastor Curt Hineline will officiate. Patricia desired to be cremated and her ashes buried next to her son's on the home property in Rural Ft. Calhoun. Memorials are suggested to the family for designation at a later date.

The family of Patricia Ann Hineline created this Life Tributes page to make it easy to share your memories.

Send flowers to the Hineline family.