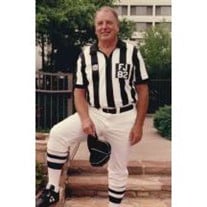 Pat Mallette, age 82 of Blair, died January 29, 2015 at The University of Nebraska Medical Center in Omaha. Visitation will be held Monday February 2, 2015 at Campbell Aman Funeral Home, beginning at 3:00 PM with family receiving friends from 6:00 to 8:00PM. Funeral services will be held at 2:00PM Tuesday February 3, 2015 at First United Methodist Church in Blair. Interment will follow services in the Blair Cemetery. Pat Mallette was born on September 25, 1932 in rural Dodge County to Edward and Cora (Fredricksen) Mallette. He played basketball and American Legion Baseball during high school. He was All-State in basketball at Uehling High School in 1949 & 1950. Pat played semi-pro baseball for Columbus during his 4 years at College. He graduated from Uehling High School in 1950 and from the University of Nebraska at Lincoln in 1954 with a Bachelor of Science (Teachers College) degree. He played baseball for UNL in 1952 to 1954 lettering all 3 years. He was also a member of the Sigma Phi Epsilon Fraternity and was in the ROTC program all 4 years of college. On August 9, 1953 he was united in marriage to Helen Rasmussen at First Methodist Church in Blair. Pat entered the Air Force as a Lieutenant and served from 1954 through 1956 in San Angelo, Texas. He played professional baseball with the Baltimore Oriole’s Farm System in 1957. Pat was an educator with Blair High School. He began teaching in 1958 as an Industrial Arts Instructor and later served as Vocational Director, and assistant basketball coach, until retiring in 1980. In 1980 Pat and his wife Helen became co-owners of the Driftwood Inn for 15 years. Also 1980 he started Pat Mallette Construction and Pat Mallette Real Estate. He worked as an official in The Big 8 & Missouri Valley Conferences for 15 years, and as an official in the NFL for 26 years between 1969 to 1994, and refereed Super Bowl XXI in 1987. Pat was elected to the Nebraska Baseball Hall of Fame and The Nebraska Sports Hall of Fame. He was a lifetime member of the American Legion. Pat enjoyed hunting and fishing all of his life and did commercial hunting and fishing. He enjoyed ballroom dancing and an occasional round of golf. He retired from everything in 1995. Pat’s true highlights in life were his wife, children, grandchildren and great grandchildren, his love of the outdoors and sports, and belief in hard work. He was preceded in death by his parents in 1987, and daughter Crystal in 2000. He is survived by his wife Helen of Blair, daughter Lori (Merle) Hansen of Blair, son Patrick (Janet) Mallette of Blair, 7 grandchildren; Mandy (Michael) Giles, Haley (Christian) Jacobson, Katy (Jacob) VanNoy, Melissa (Brian) Rushing, Becky (Andy) Max, P.J. Mallette and Michael Mallette, 9 great grandchildren; Cora, Ellis, Oliver, Clara, Jackson, Josie, Calina, Hope and Chase. Memorials may be directed to The Blair Family YMCA, First United Methodist Church or The Blair Basketball Club.

The family of Pat Mallette created this Life Tributes page to make it easy to share your memories.

Send flowers to the Mallette family.