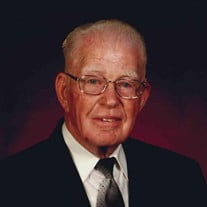 Oliver Wendell Homes, 90 of Blair died Sunday, May 8, 2016 at Crowell Memorial Home. Funeral services will be held Thursday, May 12 at First Lutheran Church in Blair at 10:30 AM, burial will follow at the Blair Cemetery. Visitation will be Wednesday, May 11 from 6 to 8 PM at First Lutheran Church. Oliver Wendell Homes was born August 19, 1925, in Oakland, Nebraska, to George and Amy (Swanson) Homes. He was the third child in a family of six boys and one girl. They grew up on a farm south of Oakland. Wendell was baptized and later confirmed at the First Lutheran Church in Oakland. During high school, he was involved in 4-H, working with dairy cattle, beef cattle and hogs. He graduated from Oakland High School in 1942. After graduation, Wendell continued to help his father with the farm work. Wendell enlisted in the Navy in January 1945, at the age of 19. He went through boot camp at Memphis, Tennessee, and then attended aviation radio and radar school at the naval air base in Memphis. He continued his training at aviation gunnery school in Jacksonville, Florida. While he was in training, World War II ended, so he did not see any wartime action. After being discharged from the Navy on July 3, 1946, Wendell returned home and helped his dad with the farm. On June 29, 1947, Wendell married Viola Christ and they moved to Blair. He stated working for the Tyson Company in Herman, Nebraska, learning the tractor mechanic trade. He later took a postal exam and was hired by the Blair Post Office on July 1, 1949. After 35 years with the Post Office, Wendell retired on June 29, 1984. After retiring, Wendell worked part-time at Bomgaars Farm Store and Campbell-Aman Funeral Home in Blair. He volunteered as a fire fighter with the Blair Fire Department for 52 years. Wendell and Viola raised two children. Randy was born May 29, 1955. Cheryl was born September 27, 1960, and was adopted into the Homes family on November 17, 1960 at seven weeks of age. Randy is married to Linda. They have two daughters, Kristi and Katie. Cheryl is married to Rod Case and she is step-mother to Rod’s two sons, Kevin and Christopher. Wendell and Viola were married for 28 years before Viola’s death on August 24, 1975, at the early age of 48 years. Wendell had been seeing a very nice lady friend for the past 16 years, Margaret Turner, of Fremont, Nebraska. They enjoyed traveling around the Midwest, sightseeing and antiquing. Wendell was an avid fisherman and hunter throughout his life, deer hunting every season he could. He collected belt buckles and his collection grew quite large with the help of family and friends. His favorite pastime was spending time with his family. He is survived by his special companion, Margaret Turner of Fremont; daughter, Cheryl Homes-Case (Rod) of Omaha; son, Randy Homes (Linda) of Omaha; granddaughters, Kristi Homes-Woodworth (Cody) and Kati Homes-Kilcoin (Jason) of Omaha; grandsons, Kevin Case (Melissa) of Jackson, Mississippi; Christopher Case of Omaha; great grandchildren, Kaiden Case and Easton Woodworth of Omaha, Avery & Maryn Alexander Case of Jackson MS.; long time friends, Lloyd (Bud) and JoAnne Wright; brothers, Wayne Homes of Salem, Oregon, Martin Homes of Blair, Wesley Homes of Monument, Colorado, Larry Homes of Fremont. He was preceded in death by his parents, George Homes and Amy Homes (nee Swanson); wife, Viola Homes (nee Christ); sister, Laverne Moseman; brother, Lloyd Homes; sister-in law, Anna and husband Harlan. Services provided by Campbell Aman Funeral Home, Blair.

Oliver Wendell Homes, 90 of Blair died Sunday, May 8, 2016 at Crowell Memorial Home. Funeral services will be held Thursday, May 12 at First Lutheran Church in Blair at 10:30 AM, burial will follow at the Blair Cemetery. Visitation will be Wednesday,... View Obituary & Service Information

The family of Oliver Wendell Homes created this Life Tributes page to make it easy to share your memories.

Send flowers to the Homes family.