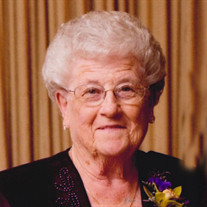 Norma Truhlsen, age 89 of Blair, passed away February 10, 2019 at Crowell Memorial Home in Blair, Nebraska. Funeral services will be held Wednesday, February 13, 2019 at First Lutheran Church in Blair at 10:30AM. Graveside service will follow in the Blair Cemetery. Visitation will be held Tuesday, February 12, 2018 with family receiving friends from 6:00PM to 8:00PM at Campbell Aman Funeral Home. Norma Mae Andersen was born on September 13, 1929 at the family home in rural Washington County to Christian and Antoinette Andersen. Norma attended the Brewster and Gardner Country schools and graduated from Blair High School in 1946 at the age of 16. eighty years ago, when Norma was 9 years old, she met Kenny Truhlsen. She helped care for Kenny’s grandmother who was a neighbor to Norma’s family. After Kenny’s grandmother passed away, Kenny’s family moved in next door to Norma’s family and the bond grew stronger and stronger through the years. Norma and Kenny were married on October 7, 1950 at First Lutheran Church in Blair. To their union four children were born. They resided in the country until they moved to town where they have lived the last 60 years in the home that Kenny built. Norma was a wonderful homemaker and worked various part time jobs. She enjoyed coffee parties with “the girls”. Norma was famous for her peanut brittle which she liked to share during the holidays. Kenny and Norma loved camping with friends and attending country music festivals. She also adored her grandchildren and loved attending their activities. She is survived by her beloved husband Kenny of 68 years, her children; Randy (Lynda) Truhlsen, Karen (Richard) Madsen, Rita (Kent) Wilcox and Ron (Rachel) Truhlsen, all of Blair. Grandchildren; Katie Truhlsen, Josh (Kari) Madsen, Cody (Rachel) Madsen, Blake Wilcox, Karley Wilcox, Cole Truhlsen and Carrie Truhlsen, greatgrandchildren; Will, Sadie Mae, Avery and Adelyn Madsen. Also surviving are her sisters; Alice Plummer, Helen (Clarence) Sheets, and brothers Gene Andersen, Duane Andersen and Dale (Brenda) Andersen, brothers-in-law; Lyle (Trudy) Truhlsen and Dean Ogle, and sister-in-law Imogene Albus, as well as many nieces, nephews, cousins and cherished friends. Norma was preceded in death by her parents and step-mother Claire Andersen, brothers Howard Andersen and Daryl Andersen, and sisters Arlene Dudley and Janice Andersen. Memorials may be directed to First Lutheran Church, Crowell Home or the Blair Volunteer Fire and Rescue.

The family of Norma Mae Truhlsen created this Life Tributes page to make it easy to share your memories.

Send flowers to the Truhlsen family.