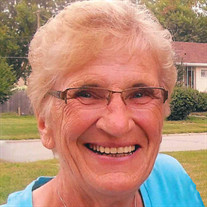 Norma Marie Kuhlmann, age 81, of Herman, passed away January 18, 2017, at her home in rural Herman. Memorial services will be held Wednesday, January 25, 2017 at 10:30 AM at Redeemer Lutheran Church in Hooper, Nebraska. Visitation will be held Tuesday, January 24 from 6 to 8 PM at Campbell Aman Funeral Home in Blair. Norma was born on February 18, 1935 in Scribner, Nebraska, the daughter of Franklin and Mary Liston. She was raised on a farm with her sister Jean. Her father remarried after her mother passed, bringing her a stepmother, Evelyn, and step brother, Marv Tichota. Norma attended and graduated from Fremont High School. After high school she earned her teaching degree and taught in a rural country school for two years. In 1952 she met Darrell Kuhlmann at a dance in Arlington. The couple married on May 23, 1954, at Grace Lutheran Church in Hooper. She was a member of the Willing Workers Club in her community and continued to meet with them throughout her lifetime. She enjoyed tending to her garden and flowers, nurturing her animals, and being a farm wife. She especially loved spending time with her children and grandchildren. Norma never knew a stranger and will always be remembered for her kindness, good nature and willingness to help others. She was a dedicated member of the Redeemer Lutheran Church in Hooper, Nebraska. Norma is survived by her children: Lon Kuhlmann of Herman, Tim (Liz) Kuhlmann of Costa Mesa, California, Lori Kuhlmann of Omaha, Lisa (Mike) McCarty of Omaha; Grandchildren Maggie (Karel) Capek, Becca Kuhlmann, Joshua (Alexandra), Jonathan, James, and Jacob Kuhlmann, Jen, Justine and Grant McCarty; one great grandchild, Hellen, and many beloved nieces and nephews She was preceded in death by her parents, husband Darrell, brother Marvin Tichota and sister Jean Scoville. In lieu of flowers memorials may be directed to the Redeemer Lutheran Church in Hooper.

Norma Marie Kuhlmann, age 81, of Herman, passed away January 18, 2017, at her home in rural Herman. Memorial services will be held Wednesday, January 25, 2017 at 10:30 AM at Redeemer Lutheran Church in Hooper, Nebraska. Visitation will be held... View Obituary & Service Information

The family of Norma Kuhlmann created this Life Tributes page to make it easy to share your memories.

Send flowers to the Kuhlmann family.