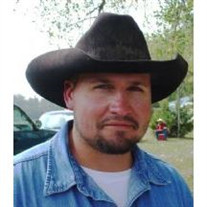 Nathan J Wood, age 35, bid farewell to this world early Saturday morning, October 12, 2013 at his home in Kennard NE. Nate was born to John and Ruth Wood of Omaha, NE on March 23, 1978. He was raised in Omaha and graduated from Louisville High School with the Class of 1996. After high school, Nate served his country with the United States Marine Corps. After honorable discharge, he worked as an apprentice steamfitter and earned his journeyman’s license after four years. Woody worked with Local Union 464 in Omaha, Nebraska and Local Union 403 in California. On July1st, 2003 at Southwest Church of the Nazarene, Nate was united in marriage to Amber A. Kocher. The couple lived in Omaha and soon began the journey to Ashland, NE, Red Oak, IA and finally made their home in Kennard, NE. Nate enjoyed spending time at The Connell Ranch in Whitman, NE riding horses and moving cattle. He loved participating in various trail rides with his family. Having an extraordinary work ethic, he was a man always on the go. The long road trips throughout the United States were enjoyable for this hard working man. He treasured the time spent with his Union brothers and sisters. He is preceded in death by his parents in September of 2001. Grandparents, Alvin and Martha Staben. He is survived by his wife Amber Wood; his five boys: Brantley Goos, 16, Tristan Goos, 14, Gavin, 9, Charlie, 7, Wyn,6; his daughter Mackenzie Kemp of Kentucky, 13. Grandparents: Roscoe and Lois Wood. His two sisters Beth Wood of Kihei, Hawaii and Laura Wood of Omaha, NE, nephew David. Mother in law, Sherry Kocher of Elkhorn. Brothers in law: Edward Kocher of Alden, KS , Steven Kuhr of Omaha, Russ and Sheila Kocher of Alden, KS, and Stan and Veronica Kocher of Bennington. Sisters in law: Marie and Vince Kruger of Uehling, and Kerry and Cecil Henson of Elkhorn. Thirty-one nieces and nephews. Uncles and Aunts from the Omaha and Louisville areas. Services to be held at the Frank Rybin Building, Washington County Fairgrounds at 1:00 P.M. Saturday, October 19, 2013. Nate Wood Memorial care of Pinnacle Bank, Elkhorn, NE. Nate will be greatly missed. He will be treasured in our hearts and memories forever.

Nathan J Wood, age 35, bid farewell to this world early Saturday morning, October 12, 2013 at his home in Kennard NE. Nate was born to John and Ruth Wood of Omaha, NE on March 23, 1978. He was raised in Omaha and graduated from Louisville... View Obituary & Service Information

The family of Nathan Wood created this Life Tributes page to make it easy to share your memories.