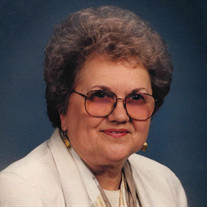 Myrtle “Mae” Gustin passed away peacefully September 5, 2020 and was preceded in death by her husband, Willard L. Gustin. Mae was born on June 3rd, 1927 in Waukon, Iowa to Earl and Myrtle Beardmore. She was baptized and confirmed at Mount Hope Presbyterian church in rural New Albin, Iowa. Mae attended her first two years of college at Hamlin University where she met her roommate and future sister-in-law, Rae Holthusen Beardmore. She then attended Iowa State University, was a member of the Kappa Delta sorority and in 1949, she earned a Bachelors of Science in Textiles and Clothing. During her university years, Mae had many accomplishments. At 21 she was Waukon’s reigning 1947 Corn Day Queen. As a senior at Iowa State, her planning and fashion work led her to designing and drawing up the blue prints and working plans for her parent’s two-story, four bedroom home. It was later described as a “feminine Frank Lloyd Wright” design. During that time, Mae also met her soon to be husband, Willard L. Gustin of Blair, Nebraska who was also attending Iowa State. After graduation, Mae taught K-12 Art Instruction in the Decorah Iowa Public School District. Mae and Willard married February 15, 1951 and shortly after moved to Willard’s hometown of Blair, Nebraska where he farmed and they began their family. During those years, Mae was active in Blair’s United Methodist Church, PEO-Chapter EQ and the American Association of University Women (AAUW). Her love for fashion and design never left her and she began painting and selling intricate miniature paintings in the 1980s, showing at many galleries and shows in multiple states. She also helped in decorating parts of the United Methodist Church and Blair’s Crowell Home. Mae’s life was a living example of the bible verse, Ephesians 4:32 – “And be kind and compassionate to one another, forgiving one another, just as God also forgave you in Christ.” She always told her children they could do and be anything they wanted in their life, if they put their minds to it. Survivors include her four children: Tahni Gustin of Blair, Nebraska, Rick Gustin of Homer, Alaska, Lisa Gustin (Paul Duran) of Glenwood, Iowa and Karen Gustin of Lincoln, Nebraska; two grandchildren: Dana Engel of Corvallis, Oregon and Caleb Engel of Denver, Colorado; and two sisters: Jane Schoh and Ruby Herman of Waukon, Iowa. She was preceded in death by her parents, a brother Glenn Beardmore, a sister Helen Mohwinkle; sisters-in-law: Rae Beardmore, Elaine (Joe) Campbell, Bettie (John) Kiernan; three brothers-in-law: Delton Mohwinkle, Nyles Herman and Leon Schoh, all of Waukon, Iowa; and numerous nieces and nephews. Mom was our angel on earth and the heavens opened their gates wide to welcome her back home. In lieu of flowers, donations can be made to an organization of donor’s choice. Services are currently pending with Campbell Aman Funeral Home.

Myrtle &#8220;Mae&#8221; Gustin passed away peacefully September 5, 2020 and was preceded in death by her husband, Willard L. Gustin. Mae was born on June 3rd, 1927 in Waukon, Iowa to Earl and Myrtle Beardmore. She was baptized and confirmed... View Obituary & Service Information

The family of Myrtle Mae Gustin created this Life Tributes page to make it easy to share your memories.

Send flowers to the Gustin family.