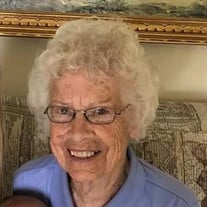 Myrna Shald, 90 passed into the arms of her savior on May 28, 2019 at Crowell Memorial Home in Blair, NE. Mass of Christian Burial will be held at 9:30 AM, Monday, June 3, 2019 at St. Francis Borgia Catholic Church in Blair. Burial will follow at 3 PM at the St. Boniface Cemetery in Stuart, NE. Visitation will be held Sunday, June 2, 2019 from 6 to 8 PM with a Rosary at 7 PM at Campbell Aman Funeral Home in Blair. Myrna was born February 16, 1929 in Springview, NE to Clyde and Alice Blake. She was one of two girls and three boys. She was raised near the Niobrara River in Meadville, Nebraska. Myrna graduated from Keya Paha County High School in 1946. She married Louis J. Shald on June 3, 1948 in Long Pine, Nebraska. The couple farmed near Stuart from 1948 to 1964 when they moved to Blair. Myrna worked at the Norge village Laundry and at North and Central Public Schools in Blair. After retirement she worked at Good Shepherd Day Care. Myrna enjoyed square dancing and was a member of the Spinning Wheels Square Dance Club until its closing. She was an active member of the American Legion Auxiliary for over 70 year. Myrna was an avid gardener and had a weed free garden that produced many a delicious meal for her family. She supported her family in everything they did. Boy Scouts and Girl Scouts in the younger years; athletics and 4-H in the high school years. Summers were spent boating and water skiing at Desoto Bend. She was a joy to be around. Myrna was preceded in death by her parents Clyde and Alice Blake, eight-year-old son David in 1957, her husband of 51 years Louis, three brothers: Marvin, Rodney and Merlin and grandson Jesse Doll. Myrna is survived by her daughter Carole (Mike) Doll of Hornick, IA; three favorite sons Rick (Cathy) Shald of Coffeyville, KS, Doug (Carolyn) Shald of Hutchinson, KS, Brian (Sherry) Shald of Blair, NE; nine grandchildren; nine great grandchildren; three great great grandchildren.

Myrna Shald, 90 passed into the arms of her savior on May 28, 2019 at Crowell Memorial Home in Blair, NE. Mass of Christian Burial will be held at 9:30 AM, Monday, June 3, 2019 at St. Francis Borgia Catholic Church in Blair. Burial will follow... View Obituary & Service Information

The family of Myrna Shald created this Life Tributes page to make it easy to share your memories.

Send flowers to the Shald family.