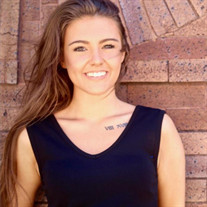 Beautifully born, lovingly made, leaving this world far before her time… Morgan Alece made her first beautiful mark on this world on October 18, 1999, like the roar of an ocean but with the sweet serenity of a first fallen snow, she entered our lives the light and joy of a first born. Perfect, beautiful ray of sunshine, already so full of love and life and wonder. Born in Scottsbluff, Nebraska to Melissa Adler and Floyd Duncan, loved and raised by her dad and mom, Chris and Melissa Adler in Blair. Nebraska. In June of 2007, "The Three Musketeers" (Morgan, McKenzi and their mother Melissa) moved to Omaha. Morgan attended Westbrook Elementary, Westside Middle School, Blair High School and graduated with honors from Boys Town in 2018. Morgan was extremely active in high school doing cheerleading, playing softball, running cross country, and was chosen to run for Vice Mayor of her class at Boys Town. She was a member of the National Honor Society and a very accomplished artist. Godfathers Pizza selected her art out of hundreds of submissions, to be the cover of their annual Christmas card for two consecutive years. Morgan's artwork also received the "Best in Show" award from the Audubon Society. She was working on various pieces of flash, building a portfolio to begin her own tattooing. Morgan worked many different jobs in her short adult life, but found she liked the fast pace of being a server and helping people the most; having worked at Throwback, Charred and Addy’s most recently and previously at Oklahoma Joe's. Morgan's reach spans the world, touching family as far away as New Zealand, from coast to coast, across Blair, Omaha, Scottsbluff and beyond. Her essence and giant, loving, compassionate heart will never be forgotten. A Celebration of Morgan's life will be held Saturday, October 2nd, 2021, at 11:00 AM at Reach Church, Blair, NE. Morgan is survived by her parents: Melissa and Chris Adler (Blair); her other half/best friend/sister McKenzi (US Army), little sister Teagan (Blair), big brother Jesse and bonus sister Jessica (Omaha) with their daughter Rei; bonus sister Tracy; dad Floyd Duncan & Cindy of Scottsbluff; grandparents: Graham & Mary Lawrie (SD) George & Judith Adler (Bennington) and Richard & Anita Duncan (Scottsbluff); aunts and uncles: Jason Dyer & Christy Wingert (SD), Bruce & Lisa Shepherd (SD), James & Krystal Duncan (Scottsbluff); cousins: Kaitlynn, Kassidy, Ashley, Keaton, Brianna, Zach & Kaelyse, Katie, Grace, Joe, Chloe and Spencer, Joshua, Jordyn and Kate; countless close and dear friends and her faithful furry companions Diego and Zeva. Morgan was preceded in death and welcomed into Heaven by her cousin Austin Shepherd, grandfather "Big John" Sigerson, grandmother "Nana" Jan Sigerson and all her great-grandparents. Memorials may be directed to the Jeanette Hunt Animal Shelter and The Humane Society.

Beautifully born, lovingly made, leaving this world far before her time&#8230; Morgan Alece made her first beautiful mark on this world on October 18, 1999, like the roar of an ocean but with the sweet serenity of a first fallen snow, she entered... View Obituary & Service Information

The family of Morgan Duncan created this Life Tributes page to make it easy to share your memories.

Beautifully born, lovingly made, leaving this world far before...

Send flowers to the Duncan family.