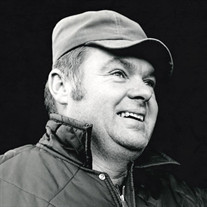 Milton “Diesel Pete” Sorensen passed away March 2, 2020. Memorial Visitation will be held Sunday March 8, 2020 from 3:00 to 6:00PM at Campbell Aman Funeral Home in Blair. Milton “Diesel Pete” Sorensen was born February 28, 1934 to Carl and Rose Sorensen in Blair. He grew up in the Blair area and graduated from Blair High School. Pete served in the United States Navy from 1956 to 1958. His father’s health declined and he came home to help with the family farm. On March 27, 1960, Kathryn (Tootie) Fitch and Pete were married. They had four children; Mitchell, Crystal, Gayle and Lowell. His passion for farming brought him great joy along with building a successful family farming operation with his sons. He enjoyed collecting antique tractors and plows, and had many close farming-friends in the community. In retirement, he and Tootie bought and remodeled the Landmark Inn hotel in downtown Blair. They hosted many travelers and made many good friends during those 10 years. Pete loved reading historical accounts especially from WWII. He enjoyed Sunday family dinners and spending time with his children and grandchildren. In his later years, as his health was declining, he was cared for at home by family and some wonderful caregivers. He passed away peacefully on March 2, at the Josie Harper Hospice House. Pete is survived by children: Mitchell (Rita) Sorensen, Crystal (Lindsey) Stark, Gayle Sorensen, and Lowell Sorensen. Grandchildren: Whitney Stark, Courtney (Stark) Kahlandt, Katie Sorensen, Jaymie Thallas, and Benjamin Smith. Great-grandchildren: Henry and Isabell Kahlandt. Sibling: Rosee Hansen, and many nieces and nephews. Pete was preceded in death by his wife Kathryn (Tootie), brother Gene Sorensen, and brothers-in-law Lyle Hansen, Bernard & Rodger Fitch, and sister-in-law Joyce Fitch. In lieu of flowers, memorials will be directed by the family to Josie Harper Hospice House and the Blair Rescue Squad.

The family of Milton "Pete" C Sorensen created this Life Tributes page to make it easy to share your memories.

Send flowers to the Sorensen family.