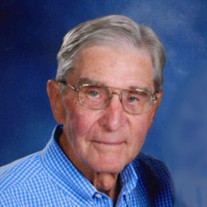 Merle Petersen, age 89 of Blair, passed away peacefully on December 16, 2021. Private family services will be held. Merle was born June 16, 1932 in rural Kimballton, Iowa, the son of Jorgen and Martha Petersen. He was baptized as an infant at Bethlehem Lutheran Church in Jacksonville, IA. Merle attended Jacksonville #8 Elementary School and later graduated from Elk Horn Iowa High School in 1949. In his early life, Merle began farming with his father and continued to farm his whole career. In 1956, he farmed east of Elk Horn, where his 3 children Cindy, Curt, and Cheryl were born. In 1965, the family moved north of Kimballton, Iowa, where he continued to farm, raise hogs, and feed cattle. In 1981, he married Joy Dixon Petersen and gained 3 more children--Sherry, Shane, and Sheila Petersen. Merle was elected to the Board of Directors of the REC in 1982. He found this very rewarding and made many friends around the state and nation. In 1992, Merle and Joy moved from the farm into a home they restored in Elk Horn, Iowa. Merle retired from farming in 1994 but continued to help at the farm. In 2005, Merle and Joy moved to Blair and he would continue to commute back to the farm whenever his help was needed. Merle loved his family and attending events that his children and grandchildren were involved in. He never met a stranger and had a gift of conversation. Merle and Joy were able to travel extensively. His favorite was their trip to Israel in 2005 where he was baptized in the River Jordan on his birthday. They enjoyed spending the last many winters in Yuma, Arizona. Merle is survived by his beloved wife, Joy; children, Cindy Steen, Curt (Cindy) Petersen, Cheryl (Sam) Sacco, Shane (Kathy) Petersen, Sheila (Ron) Martin; grandchildren, Trevor (Briana) Steen, Cody (Kaitlynn) Steen, Brandi (Nick) Pierce, Jamie (Megan) Petersen, Danielle Petersen, Taylor Petersen, Justine (Matt) Sullivan, Krista (Buddy) Kauzlarich, Samantha (Kyle) Stinson, Tony (Kaylee) Sacco, Lindsey (Dustin) Long, Ben (Linley) Petersen, Gracie (Kane) Eggers, Shay (Jennifer) Welshofer and Michaela Welshofer; 14 great grandchildren; sisters, Pauline Bahnke and Ellen Whitaker, and sister-in-law Judy (Bob) McMaster. He was preceded in death by his parents, daughter Sherry Petersen, brothers-in-law Bill Bahnke and Warren Whitaker, and nephew Dick Bahnke. Memorials may be directed to the family for later designation.

Merle Petersen, age 89 of Blair, passed away peacefully on December 16, 2021. Private family services will be held. Merle was born June 16, 1932 in rural Kimballton, Iowa, the son of Jorgen and Martha Petersen. He was baptized as an infant... View Obituary & Service Information

The family of Merle Petersen created this Life Tributes page to make it easy to share your memories.

Merle Petersen, age 89 of Blair, passed away peacefully on December...

Send flowers to the Petersen family.