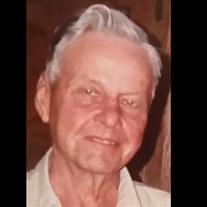 Merle Charles Andersen, age 89, died Sunday, January 15, 2017. Funeral services will be held at 10:30 AM on Thursday at First Lutheran Church in Blair, followed by burial at the Kennard Cemetery. Visitation will be held Wednesday at Campbell Aman Funeral Home with family receiving friends from 6-8 PM. Merle Charles Andersen was born August 19th, 1927, at the family farm of his parents, Rosie (Carlson) and Torvel Andersen. He was baptized November 6th, 1927, at Emmaus Lutheran Church in Kennard, Nebraska, and was confirmed there on June 16th, 1940. Merle attended school in Kennard and graduated from Kennard High School in 1944. Merle married Mardelle Elaine Kahnk on June 30th, 1946, and the couple were blessed with four children. Merle began by farming with his father and also worked part-time for August Matzen, where he did custom spraying, picking, and drove truck. He purchased his first farm from Auggie in 1961 where they began their farming career raising crops, livestock, and their family. Merle and Mardelle farmed in Washington County for over 70 years east of Kennard. He served on the Kennard School Board, was a member of the Washington County Cattlemen, as well as the Papio-Missouri NRD. Merle and Mardelle had the opportunity to travel to Brazil with an NRD group where they were able to experience South American agriculture. They loved to travel and took several other trips with friends during the winter months to Las Vegas, California, Hawaii, as well as visiting their daughter, Nancy, in Ohio. He farmed full-time until he was 70 years old and continued to help on the farm with his son, Tim, and grandson, Jarett, until his passing. His passion and love of the farm was never-ending. To Merle, farming wasn't just a job — it was a way of life. Merle is survived by his wife, Mardelle, of 70 years; daughter, Nancy (Chuck) Elvers, of Perrysburg, Ohio; son, Tom (Bev) Andersen, of Blair; son, Tim (Kim) Andersen, of Blair; 12 grandchildren; and 23 great-grandchildren. He was preceded in death by his parents, Torvel and Rosie Andersen; son, Terry Andersen; grandson, Mark Andersen; and sisters, Evelyn Wulf and Phyllis Suverkrubbe. Memorials may be directed to the Kennard Volunteer Fire and Rescue Department in Merle's name.

Merle Charles Andersen, age 89, died Sunday, January 15, 2017. Funeral services will be held at 10:30 AM on Thursday at First Lutheran Church in Blair, followed by burial at the Kennard Cemetery. Visitation will be held Wednesday at Campbell... View Obituary & Service Information

The family of Merle Charles Andersen created this Life Tributes page to make it easy to share your memories.

Send flowers to the Andersen family.