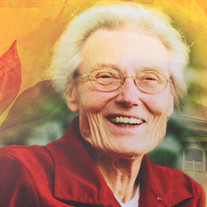 Mary Christine Weckmuller, age 91 of Blair, passed away July 12, 2018 at Good Shepherd in Blair, Nebraska. Funeral services will be held Monday, July 16, 2018 at 10:30 AM at First Lutheran Church in Blair. Graveside services will follow at the Blair Cemetery. Visitation will be held Sunday, July 15 at Campbell Aman Funeral Home beginning at 2:00 PM with family receiving friends from 6 to 8 PM. Mary was born on March 17, 1927 in Randolph, Nebraska, the daughter of Danish Immigrants Ingvard and Mathilde Skobo. Mary was the oldest of four daughters. Mary was raised on a farm in Laurel. The Skobo family moved to Blair because Ingvard and Mathilde wished to provide a Danish Lutheran education to their children through Dana College. While attending Dana, Mary met the love of her life, Ray Weckmuller. She then went on to Nursing school at Immanuel School of Nursing in Omaha. Mary and Ray were united in Marriage at First Lutheran Church in Blair on April 6, 1952. The couple were blessed with four children. Mary worked as a nurse at the Blair Clinic, Memorial Community Hospital, and later was an instructor at the Clarkson School of Nursing. Mary will always be remembered as a caregiver in the community, helping elders in her neighborhood. She was a supporter of Dana College, Memorial Community Hospital and First Lutheran Church. Mary is survived by her children: Ann (William) McPhillips of Ft. Calhoun, Lyn Pahls of Omaha, Carol Weckmuller of Blair; grandchildren: Sarah (Jay) Melland of Blair, Katie (Justin) Mantz of Herman, Jake Pahls of Omaha, Morgan (Stephen) Morefield of Leoti, KS, Anna Weckmuller of Blair; four great grandsons; Boedy Mantz, Hunter Melland, Parker and Garrett Morefield; sister Edna (Rees) McFarlane of Houston, TX; brother-in-law Glenn Jackson of Rochester Hill, MI; sister-in-law Marion (Warren) Truland of Troy, NY; along with numerous nieces and nephews. She was preceded in death by her husband Raymond, son Paul, sisters Edie Faye and May Jackson. Memorials may be directed to First Lutheran Church or Good Shepherd Lutheran Community.

Mary Christine Weckmuller, age 91 of Blair, passed away July 12, 2018 at Good Shepherd in Blair, Nebraska. Funeral services will be held Monday, July 16, 2018 at 10:30 AM at First Lutheran Church in Blair. Graveside services will follow at the... View Obituary & Service Information

The family of Mary Christine Weckmuller created this Life Tributes page to make it easy to share your memories.

Send flowers to the Weckmuller family.