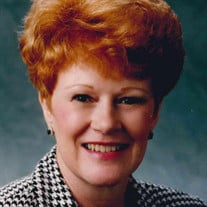 Mary B. (Poulson) Larson Ph.D., age 74 of Blair, died January 2, 2016 at Memorial Community Hospital in Blair. Funeral services will be held Saturday at 10:30AM at First United Methodist Church in Blair, burial will follow services in Blair Cemetery. Visitation will be held Friday at Campbell Aman Funeral Home beginning at 3:00PM with family receiving friends from 6:00 to 8:00PM. She is survived by husband David L. Larson; children Judy (Matt) Veatch of Lawrence KS, Susie (Dennis) Burket of Shawnee, KS and William H. Mitchell (Heike Tammen) of Olathe, KS; step-children Angel McGee, Barry (Tina) Larson and Jay (Liz) Larson all of Omaha; 10 grandchildren; sisters Jo (Dave) Baxter of Lincoln, NE, Billie Lenz of Olathe, KS and Alice Poulson (Tony Price) of Monroe, NY; nieces and nephews; an aunt and a cousin. She was preceded in death by her parents Clair and Phyllis Poulson, former husbands James Kuhn and William S. Mitchell. Mary was born May 25, 1941 in Scottsbluff, NE. She grew up in Lincoln, NE until her senior year in high school when she moved to Omaha graduating from Westside High School in 1959. After living in Omaha 46 years, she and husband Dave built a home on the Missouri River and moved to Blair in 2004. Among Mary’s greatest joys in life have been her children, grandchildren wonderful friends and a satisfying career in education. Dr. Larson was a Chi Omega at UNO graduating in Home Economics and later a master’s degree in Counseling and Guidance. She received her PhD in Educational Administration from UNL. Mary worked for over 21 years at Clarkson College teaching nutrition and diet therapy and administering student services. She retired early after serving as Vice President for Institutional Advancement. After that she worked part-time in interior design and retail clothing sales fulfilling other long-time ambitions. Before succumbing to a 16 year battle with breast cancer, Mary was a member of Chi Omega Alumnae, Blair’s Dazzling Dames Red Hatters, and the Blair AAUW Chapter. She participated in the Friends of the Blair Library and sang in the choir at Blair’s First United Methodist Church where Mary and Dave became members. Mary and Dave previously were members of Omaha’s Presbyterian Church of the Cross. Memorials are suggested to Blair’s First United Methodist Church Building Fund, Omaha’s Presbyterian Church of the Cross or Clarkson College

The family of Dr. Mary B. (Poulson) Larson created this Life Tributes page to make it easy to share your memories.