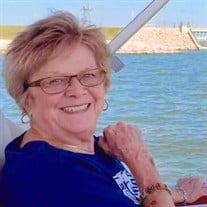 Mary A. Main, age 80 of Blair, passed away January 16, 2022. Funeral services will be held Saturday, January 22, 2022 at 11:00 AM at First Lutheran Church in Blair. Burial will follow in the Shelby, Iowa Cemetery. Visitation will be held Friday, January 21 from 6-8 PM at Campbell Aman Funeral Home. Mary Alice (Hanson) Main was born August 1, 1941, to Raymond and Fern (Simonson) Hanson in Yankton, South Dakota. She was baptized and confirmed at the Vangen Lutheran Church in Mission Hill, South Dakota. She was the second oldest of five children and grew up on the family farm in Mission Hill. She attended Rempp Country School #18, and then graduated from Volin High School in 1959. She then went on to attend two years at Concordia College in Moorhead, Minnesota. After returning to the Sioux Falls area, she met and later married Rodney Main on June 22, 1963. From this union four children were born. Lori Lin, Dawn Marie, Deanna Lea, and Ryan Rodney. Rod and Mary lived in Colorado, South Dakota, Nebraska and Iowa, before finally settling in Blair, Ne. This has been home since 1985. Mary worked all throughout her life, she was an accomplished executive assistant in a variety of career paths. She retired from Great Plains Communications in Blair after working there for many years. If you knew Mary, she couldn’t stay away from people, and went back to work part time most recently at Walmart and Family Fare. Mary was musically talented and could play the piano by ear, all she needed was to hear a song and she could play it. She also enjoyed gardening, politics, and loved all sports. She was a passionate Nebraska Cornhusker fan and was always ready for game day!! She loved to be around people and befriended everyone she met. She never met a stranger. Her greatest love was being a mother, grandmother, and great-grandmother. Her faith was very important to her, she was a member of First Lutheran Church, and always reminded her children “God is in control!” Survivors include her four children, Lori (David) Robinson, Dawn McGauley, Deanna (Dan) Whyte, and Ryan (Shelly) Main; grandchildren, Ross Robinson (fiancé Kara Busch), Keith (Kristen) Robinson, Tyler (Courtney) Robinson, Dylan Robinson (fiancé Jayna Olesen), Joseph McGauley (fiancé Nichole Uhing), Michael McGauley, Matthew Whyte, Lee Whyte, Makenzie Whyte, Lauren Main, Riley Main, and Lincoln Main; great-grandchildren, Kendra, Cooper, Reagan, and Dallas Robinson, Paisley, and Aiden Robinson; sisters, Elaine (Barry) Olson, Renda (Brian) Bertrand; and many nieces, nephews, relatives, and friends. She was preceded in death by her beloved husband, Rodney Main; son-in-law, James McGauley; parents and siblings JoAnn and Darrel. Memorials may be sent to the Washington County Food Pantry.

Mary A. Main, age 80 of Blair, passed away January 16, 2022. Funeral services will be held Saturday, January 22, 2022 at 11:00 AM at First Lutheran Church in Blair. Burial will follow in the Shelby, Iowa Cemetery. Visitation will be held Friday,... View Obituary & Service Information

The family of Mary A Main created this Life Tributes page to make it easy to share your memories.

Send flowers to the Main family.