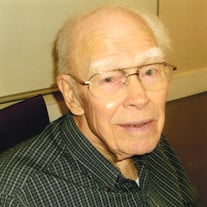 Martin Thomas Homes, 91, originally of Blair, passed away on September 24th in Omaha. Visitation is Friday, September 27, 6:00 – 8:00 pm, Campbell-Aman Funeral Home; Funeral services are Saturday, September 28, 10:30 am, First Lutheran Church, Blair and burial, Blair Cemetery. Martin Thomas Homes was born March 4, 1928, Oakland, NE, to George and Amy Homes, Martin attended school in Oakland, where he was active in band, track, and 4-H, exhibiting animals at AkSarBen and the county and state fairs. On June 25, 1950, Martin married Beverly Von Seggern of rural Scribner. Shortly after marriage, he was drafted and served in the Army during the Korean War. He’s a 50 year member of the Blair American Legion. For 33 years, Martin commuted to Millard, working at Western Electric, where he participated in their Employee Suggestion Program, receiving the largest cash award ever conferred in the program for one of his ideas to redesign the diamond dies through which wire was drawn. Martin and Beverly traveled throughout the US, Europe and British Isles. Martin loved his family, built play sets for grandchildren, took them sledding and hunting. Having a soft heart for cats, he would find homes for the strays that wandered to their house. For many years, Martin was Head Usher at First Lutheran Church, and with Beverly managed the Children’s Department at the Annual Hospital Rummage Sale. Martin is survived by his wife of 69 years Beverly; daughters Cynthia (David) Musick of Papillion, and Laurie (Steve) Harper of Omaha; 7 grandchildren: Allison and Isaac Russell, Melissa and David Klug, Mark and Sarah Harper, and Megan Harper; 2 great-grandchildren: Addison Russell and William Klug; brother Larry Homes of Wahoo; several nieces, nephews, and his beloved cat Blackie. Memorials may be directed to Blair’s First Lutheran Church, Blair Memorial Community Hospital, or St. Croix Hospice, Omaha.

The family of Martin Thomas Homes created this Life Tributes page to make it easy to share your memories.

Martin Thomas Homes, 91, originally of Blair, passed away on...

Send flowers to the Homes family.