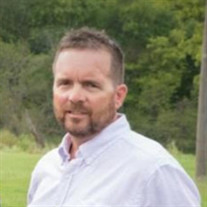 Mark Russell Wulf, “Chuck”, age 51 of Blair, passed away October 15, 2020 at Lakeside Hospital in Omaha. Memorial services will be held Friday, October 23, 2020 at 10:30 AM at Reach Church (Formerly Country Bible Church), Blair, NE. Visitation will be held Thursday, October 22 from 2:00 PM to 8:00 PM at Campbell Aman Funeral Home in Blair. A luncheon will be held following the graveside service at the Blair Fire Hall South Station. Mark was born on August 25, 1969 in Blair, the son of Vernon and Lynn (Stewart) Wulf. He was raised in Blair and graduated from Blair High School in 1988. Prior to his senior year, Mark joined the Army Reserves and attended bootcamp in Ft. Benning, Georgia. On September 25, 1993, he was united in marriage to Nicole Renae Smith at Country Bible Church in Blair. Mark worked construction most of his career; he began working for Ericksen Construction when he was 17 and most recently for Gethmann Construction as a heavy equipment operator, primarily running cranes. Mark was an active member of the Blair Volunteer Fire Department and Rescue Squad and served just short of 30 years (February 7th, 1991). He was passionate about helping others, spending quality time with friends and family. He loved classic cars, especially his 1957 Chevy he purchased from his Aunt Nina, hunting, fishing and most of all he loved his girls. Mark is survived by Niki; his daughters: Alexis and Berit; father Vernon; siblings: Michelle (Dave) Olson, Mike (Pam) Wulf, Mimi (Chad) Cemer; mother and father in law Steve and Peggy Howard; siblings-in-law: Nate (Holly) Smith, Shontelle Tweedy, Nicole (Steve) Bolton, Dan (Becky) Smith; along with many nieces, nephew, aunts, uncles, cousins and countless friends. He was preceded in death by his mother Lynn, nephew Tyler Cemer, and his best friend Bryan Wrightson. Memorials may be directed to the Blair Volunteer Fire and Rescue or an organization of the donor’s choice.

The family of Mark Russell Wulf created this Life Tributes page to make it easy to share your memories.

Send flowers to the Wulf family.