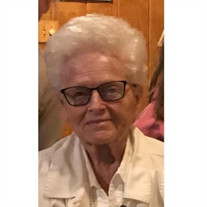 Marjorie Ann Hoier (Thomsen) was born on October 17, 1931 to Emil and Lona Thomsen. She died November 3, 2020 in her home. Marjorie graduated at 16 from Elkhorn High School in 1947. She went on to be a secretary in her late teens and early twenties. She married Leonard Melvin Hoier on April 19, 1950. To this union four children were born. Melody Anne was born in 1951, Daniel Thomsen in 1953, Nick Melvin in 1955, and Jeff P. in 1957. Marjorie Ann was baptized and confirmed in the Elkhorn Lutheran Church. Most recently she was attending Country Bible Church in Blair, NE. Marge loved to dance, especially the jitterbug! She was a great cook, and nobody made better stuffing on thanksgiving! All of Jeff and Nick's friends referred to her as Mother Marge, but her grandkids and great grandkids lovingly referred to her as "Little Marge". She was a big fan of Quarter Horses and loved everything Politics. She was a board member of the PVPA for many years. Marge was an active member of the Herman Legion Ladies Auxiliary and she thoroughly enjoyed selling fireworks every year for the 4th of July. She loved teaching Sunday School and read her bible faithfully. She enjoyed going for coffee at the Blair Bakery and playing cards at PB75 when she was able. She hated missing any of her grandchildren's many activities, and you could frequently find her watching from the bleachers or a lawn chair. She was very proud to be a Stephens Minister. Marge's faith in our Lord and Savior Jesus Christ was strong! She is no doubt in Heaven, rejoicing! Marjorie was preceded in death by her husband Mel and three children: Melody, Daniel, and Nick; Parents: Emil and Lona Thomsen; sister Melva (Toots) Godbersen and brother-in-law Merritt Rosenbaum. She is survived by her son and daughter-in-law Jeff and Marj Hoier; grandchildren: Abby and Jesse Sheets and Buck and Allie Hoier, all of Herman, NE, Sherri and Lance Nozik of Columbus, Mississippi, Dakota Hoier of Council Bluffs, IA, and Taylor Wager of Covington, Louisiana; great grandchildren: Mylee, Maggie, Oakley, and Brenna Sheets. Laney, Charley, and Hayes Hoier, all of Herman, Izabella and Avayah Hoier of Council Bluffs. Funeral services will be held Saturday, November 7 at 10:30 AM at Reach Church in Blair, NE. Burial will follow in the Prospect Hill Cemetery in Elkhorn, NE. Visitation will be held Friday, November 6 from 2 to 7 PM with family present from 5 to 7 PM at Campbell Aman Funeral Home in Blair.

Marjorie Ann Hoier (Thomsen) was born on October 17, 1931 to Emil and Lona Thomsen. She died November 3, 2020 in her home. Marjorie graduated at 16 from Elkhorn High School in 1947. She went on to be a secretary in her late teens and early twenties.... View Obituary & Service Information

The family of Marjorie Ann Hoier created this Life Tributes page to make it easy to share your memories.

Send flowers to the Hoier family.