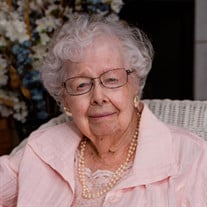 Service livestream will be available at FACEBOOK https://www.facebook.com/groups/163883280403150 YOUTUBE https://www.youtube.com/channel/UCuehkOyrZGFBrg8F3LCSEGg Margaret L. Peck, age 98 of Blair, passed away April 27, 2022, in Blair, after a brief illness. Funeral services will be held Tuesday, May 3, 2022, at 10:30 AM at First United Methodist Church in Blair. Pastor Gina Gile will be officiating. Pallbearers will be grandsons, with interment in the Blair Cemetery. Visitation will be held Monday, May 2 with public viewing held beginning at 2:00 PM with family receiving friends from 6:00 PM to 8:00 PM at Campbell Aman Funeral Home. Margaret L. Peck was born on October 1, 1923, to Samuel J. Baker and Vesta M. (Taylor) Baker in Weeping Water, NE. She was the second of four children. She grew up in Weeping Water and graduated from Weeping Water High School in 1941. She attended the Midwest Hairdressing Academy in Lincoln, NE and in 1945, received her cosmetology certificate, and worked as a beautician. In 1946, she met Cecil Peck, and the couple was married on February 7, 1947. Three children were born to this union: Janet, Nancy, and Steve. Margaret was a devoted homemaker as she raised a family. In 1969, she and Cecil founded Peck Manufacturing in Herman, NE, where they both worked until retirement. She was the secretary and also worked in the shop assembling small parts when necessary. She and Cecil had been married for 56 years, until his death in 2003. They enjoyed traveling on many cruises and a vacation to Europe, and being with family. She also enjoyed playing cards, games, and crafts. Margaret had six grandchildren: Bryce Williby, Lisa Gatewood, Jason Owen, Jill Garrett, Hope Jensen, and Will Owen; fourteen great grandchildren, and one great-great grandchild. She was preceded in death by her parents, four brothers: Ivan, Lewis, Charles, and Dale, along with their wives. She is survived by daughters: Janet and Craig Owen of Audubon, IA, Nancy and Ron Williby of Blair, NE; son Steven and Rosa Peck of Blair, NE; sister Ruth and Bill Leidy of Norman, OK; along with many nieces, nephews, family and friends. She was a resident of Carter Place in Blair for over three years and had many friends there. Margaret was a member of the First United Methodist Church in Blair for over seventy years. She was an active member of UMW circle and was a Sunday School teacher. Memorials are suggested to Blair Rescue Squad or Shriners Hospital for Children.

The family of Margaret Peck created this Life Tributes page to make it easy to share your memories.

Send flowers to the Peck family.