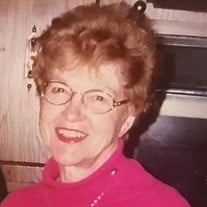 Mardelle Elaine (Kahnk) Andersen, 88 Mardelle Andersen passed away Thursday, May 4th, 2017. Mardelle Elaine (Kahnk) Andersen was born October 25, 1928, in Kennard, Nebraska to Gustav and Amanda Kahnk. She was baptized July 13th, 1941, at Trinity Lutheran Church in Blair, Nebraska and confirmed there on May 17th, 1942. She graduated from Kennard High School on May 24th, 1945, and attended Wayne State College, where she received her teaching degree. She taught Elementary school in Kennard for a brief period before becoming a wife and mother. She married Merle C. Andersen on June 30th, 1946, and the couple were blessed with four children. Mardelle enjoyed dancing and traveling with a close group of friends. They took many trips throughout the years including Las Vegas, California, Hawaii, and Brazil. Mardelle was the ultimate homemaker. She loved nothing more than to have a house full of her friends and family and to cook for all of them. No one would ever leave her house hungry. She was a devoted mother and grandmother and always put others needs before her own. She enjoyed planting flowers and gardening. She took great pride in landscaping their farmstead. She played a big part in the operation of the farm. She did whatever job was asked of her whether it was running a tractor, hauling grain, or watching grandkids. Mardelle is survived by her daughter, Nancy (Chuck) Elvers, of Perrysburg, Ohio; son, Tom (Bev) Andersen of Blair; son, Tim (Kim) Andersen of Blair; 12 grandchildren; and 23 great-grandchildren. She was preceded in death by her husband, Merle Andersen; her parents, Gustav and Amanda Kahnk; son, Terry Andersen; grandson, Mark Andersen; and brother, Roland Kahnk. Memorials may be directed to the Alzheimer’s Association of Nebraska in Mardelle’s name. Visitation will be held Sunday, May 7th at Campbell Aman Funeral Home with family receiving friends from 6-8. Funeral services will be held at 10:30 a.m. on Monday, May 8th at First Lutheran Church in Blair, followed by burial at the Kennard Cemetery.

The family of Mardelle E Andersen created this Life Tributes page to make it easy to share your memories.

Send flowers to the Andersen family.