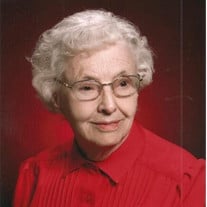 Madelyn Marie Musick, age 93, of Blair died May 18, 2018 at Carter Place in Blair, NE. A memorial service will be at 10:30 on May 23, 2018 at the First United Methodist Church of Blair, with the Rev. Gina Gile officiating. Burial will be at the Blair Cemetery. Visitation will be from 6:00 to 8:00 p.m. on May 22, 2018 at Campbell-Aman Funeral Home in Blair. Survivors include son David and his wife, Cynthia, of Elkhorn, NE, and their children, Allison (Isaac) Russell and Melissa (David) Klug; son Mark Musick and his wife, Susan, of Lincoln, NE, and their children Bradley (Peggy) and Michelle (Robert) Thompson; son James Musick and his wife, Karla, of Blair and their children, Nikolaus (Ivy) Heil, Gretchen Heil, Katherine (Jeremy) Stober, Jacqueline Stephens and Melanie Musick; and daughter, Marilyn Musick, of Kearney, NE. Great grandchildren include: Aden and Abigail Musick; Ethan Kemper; Roy and Katy Thompson; Jaden, Josiah, Lacey and Isabella Stober; Karalina and Kenzie Stephens; and Kobe, Delaney, and Tate Heil. Other survivors include her sisters Anna Mae Peterson and Norma Apple, and her brother Melvin Rumbaugh. Madelyn was born Feb. 15, 1925, to Everett and Anna (Wheeler) Rumbaugh of Howe, NE. She attended the Howe School and Howe Evangelical Church and became a member of God’s family when she was 11 years old. A strong faith was important to her and helped her family through the depression years. She moved to Richardson County in 1937 and attended the Franklin School where she won the eighth grade Richardson County Spelling Contest. She attended Falls City High School for one year, then moved back to Nemaha County, where she graduated from Auburn High School. In 1947, Madelyn received her Registered Nurse Diploma from the Nebraska Methodist School of Nursing in Omaha. She married Russell Robert Musick on March 16th, 1947, and they moved to Blair, where Russell began working at the J.M. McDonald department store. As a stay-at-home mom, she made church attendance a priority for her family, evidenced by her 61-year membership at the First United Methodist Church in Blair. She served as a Cub Scout den mother for her sons’ scout pack, and was active in 4-H with her daughter. She was a wonderful cook and compiled two recipe books of family recipes for her children. She was a member of the Washington County Nurses Association (serving as president in 1964), and enjoyed working as a registered nurse at Crowell Home in Blair for 8 years. Madelyn and Russell were active in the Washington County Genealogical Association and she was secretary of the Monday Afternoon Women’s Club. For the last four years of her life, Madelyn resided at Carter Place in Blair, where she received exceptional care. Madelyn was preceded in death by her parents, her brother Harold Rumbaugh, and her husband, Russell. In lieu of flowers, memorials may be sent to the Blair First United Methodist Church.

Madelyn Marie Musick, age 93, of Blair died May 18, 2018 at Carter Place in Blair, NE. A memorial service will be at 10:30 on May 23, 2018 at the First United Methodist Church of Blair, with the Rev. Gina Gile officiating. Burial will be... View Obituary & Service Information

The family of Madelyn Marie Musick created this Life Tributes page to make it easy to share your memories.

Send flowers to the Musick family.