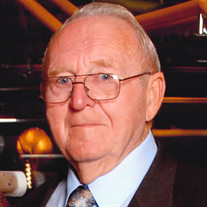 Lyle W. Christensen, age 87 of Blair, passed away December 26, 2018 at his home in rural Blair surrounded by family. Funeral services will be held Saturday, December 29, 2018 at 10:30 AM at First Lutheran Church in Blair. Military graveside services will follow in the Blair Cemetery. Visitation will be held Friday, December 28 beginning at 2:00 PM with family receiving friends from 6 to 8 PM at Campbell Aman Funeral Home. Lyle was born on June 18, 1931 at the family home in rural Blair the son of Otto and Lydia Christensen. Lyle graduated from Blair High School and then joined the United States Air Force in 1951 and served in Texas and Illinois; he was honorably discharged in 1955. After his time in the service he returned to the home farm. On March 20, 1965 Lyle’s father passed away, Lyle took over the family farm and continued to care for his mother until her passing on January 17, 1992. On February 19, 1994 he was united in marriage to Bonnie Moore at First Lutheran Church in Blair. In 1996 Lyle retired from farming. Lyle and Bonnie enjoyed being Winter Texans for 19 years. Lyle also enjoyed socially playing cards with friends and traveling. He was a member of First Lutheran Church in Blair, served on the Blair Rural Fire department board since 1985, served on the ASCS Board, was a 50-year member of the American Legion, and was a charter member of the Blair Eagles Club. Lyle is survived by his wife Bonnie of Blair; stepchildren: Lee (Dawn) Vlcek of Murray, NE, Richard (Pam) Vlcek of Blair, LeAnn Forsen of Herman; nieces and nephews: Deb (John) Sullivan of Woodbine, IA, Bruce (Cindy) Webster of Blair, Mark (Christine) Webster of Blair; grandchildren, great grandchildren, and great nieces and nephews; sister-in-law and brother-in-law Judy and Dale Moore of Blair, brother-in-law Douglas Claxton of Ft. Calhoun, sisters-in-law Sherri Zalley and Carolyn Valdez of Missouri. He was preceded in death by his parents and sister and brother-in-law LaVonne and Ozzie Webster. Memorials may be directed to Blair American Legion or the Blair Volunteer Fire Department.

Lyle W. Christensen, age 87 of Blair, passed away December 26, 2018 at his home in rural Blair surrounded by family. Funeral services will be held Saturday, December 29, 2018 at 10:30 AM at First Lutheran Church in Blair. Military graveside... View Obituary & Service Information

The family of Lyle W. Christensen created this Life Tributes page to make it easy to share your memories.

Send flowers to the Christensen family.