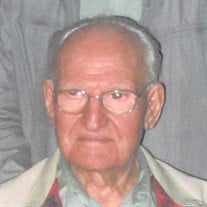 Louis “Louie” M. Fischer, 89, of Blair, passed away Friday, April 13, 2018 at Chi Immanuel Hospital in Omaha after a brief illness. Louis was born May 6, 1928, in Fremont, NE., to Ernest and Anna (Scholl) Fischer, the youngest of six sons. He grew up on the family farm about 8 miles east of Winslow. He attended Hancock School through the 8th grade as his father needed him on the farm due to his older brothers serving in WWII or building war planes. He was drafted into the Army and served in the 45th Infantry Division, Thunderbirds during the Korean War. After being discharged, he went to work for Farmers Equipment Company. In 1960 he went into business for himself buying the Northside Repair and Machine Shop in Blair. In 1995, when his eyesight started to fail, he sold his business and retired. Louie enjoyed Nascar racing, competitive shooting and Western novels, especially Louis L’Amour and Zane Grey. With his brother, Ben, they owned a stock car whick they raced in the Arlington and Blair area in the early-mid 1950’s. Louis was a life member of the American Legion and the VFW in Blair and a member of the Omaha Legion Post #1 Rifle Club. Louis is survived by nieces and nephews Ruth Fischer, Betty (Lloyd) Brooks and Mike Fischer, all of Fremont, NE.; Curt (Lu) Fischer, Joyce Fischer, Gail Fischer and Ed Fischer, all of Texas; Donna Fischer of Los Angeles, Vernon (Judi) Fischer of Idaho; sister-in-law Yash Fischer of Los Angeles; and special friends Dale and Imogene Albus of Blair. He is preceded in death by his parents, five borhters, Robert, Donald, Eugene, Benjamin and Howard and nephew Harlen Fischer. Funeral services will be held at 10:30AM Wednesday at Campbell Aman Funeral Home in Blair with Pastor Scott Frederickson officiating. Visitation will be held Tuesday at Campbell Aman with family receiving friends from 6:00 to 8:00PM. Burial will be at the Blair Cemetery with Military honors. A celebration of life will be held Saturday, May 5th at Carter Place, 1028 Joann Drive in Blair, from 2 to 4 PM, and also to commemorate what would have been Louis 90th birthday. Memorials may be directed to First Lutheran Church in Blair, Nebraska.

The family of Louis "Louie" M. Fischer created this Life Tributes page to make it easy to share your memories.

Send flowers to the Fischer family.