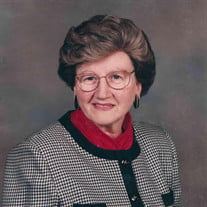 Lorene Batenhorst age 87 of Blair, died October 7th, 2015 at Immanuel Hospital in Omaha, Nebraska. Funeral Services will be held Thursday October 15, 2015 at 10:30 am at Trinity Lutheran Church in Blair, Nebraska. Visitation will be held Wednesday, October 14th beginning at 1 pm with family receiving friends from 6:00 to 8:00 pm. Graveside services will be held Thursday at 2:30 pm at the St. Michael's Catholic Cemetery in West Point, Nebraska. Lorene Frieda Batenhorst was born May 11, 1928, to Arlie and Frieda (Daberkow) Schultz on a farm north of Beemer, Nebraska. She attended a country school outside of Beemer for eight years, walking two miles to and from school each day. She graduated from Wisner High School in 1946, after which she took a secretarial job at Seemen Trucking in West Point, Nebraska. On September 27, 1950, Lorene married Bruno Batenhorst, and together they had four children; Boyd, Bonnie, Bryan and Beverly. In 1959, the family moved to Tilden, Nebraska, where Lorene was employed at Hofmann Pharmacy to help provide for the family. In 1974, the family moved to Blair where she worked until her retirement from the Fort Calhoun Stone Company. She served at Trinity Lutheran Church in many capacities, including teaching Sunday school for many years. Lorene enjoyed vacationing with her family, bowling, cooking, sewing, gardening, and attending her children’s activities. Lorene’s faith in God was an essential part of her life, and she took great pains to see that her children didn’t miss church or catechism. Her love for family and friends was expressed throughout her life by sending cards and letters on holidays and special occasions. Lorene was preceded in death by her son-in-law Randall Ashland, daughter Bonnie Lambrecht, husband Bruno, and her parents Arlie and Frieda Schultz. Lorene is survived by her brother Vernon (Lois) Schultz of Wisner, Nebraska, sons Boyd Batenhorst of Tilden, Nebraska, and Bryan (Michelle) Batenhorst of Lincoln, Nebraska, daughter Beverly (Kevin) Willis of Blair, Nebraska; thirteen grandchildren, thirteen great-grandchildren, as well as nieces and nephews. Memorials may be directed to Trinity Lutheran Church in Lorene’s name.

The family of Lorene Batenhorst created this Life Tributes page to make it easy to share your memories.

Send flowers to the Batenhorst family.