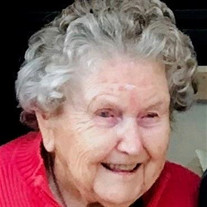 Lois Jean Wood, age 98 of Blair passed away February 10, 2020. Memorial services are currently pending due to social interaction restrictions and will be updates as soon as they are reset. Burial will be in the Mount Hope Cemetery in West Point, NE. Lois Wood was born on May 6, 1921, in West Point, Nebraska, to Earl and Pauline (Will) Anderson. She graduated high school in West Point and received her Registered Nursing degree from Saint Joseph’s School of Nursing in Omaha. After working for a short time at the St. Francis Memorial Hospital in West Point, she joined the Public Health Service and served as a nurse at the Naval Hospital in Chicago and later at the Marine Hospital on Statin Island, New York. It was while she was stationed in Chicago that she met Rocky, the love of her life. He was her patient and she was his nurse. The couple married after the war on July 1, 1946, in Lombard, IL. As newlyweds, they lived in Chicago, IL, near Wrigley Field, and their three children were born when they lived in Franklin Park, a suburb of Chicago. In 1956, they moved to West Point, NE, to take over the Anderson Family Farm. Lois was initiated into Eastern Star in West Point, NE, and maintained a membership in the Order of the Eastern Star throughout her life. In 1968 the family moved to Elkhorn and then on to Blair in 1972 where they became members of First Lutheran Church. When the family moved to Elkhorn, Lois began working as a Registered Nurse at Haven House, now known as Ambassador Health, in Omaha. She loved being a Charge Nurse and had many memorable experiences. She was snowed in at Haven House during the blizzard of 1975 and worked the aftermath of the tornado of 1975. Before Lois lost her sight to Macular Degeneration, she enjoyed gardening, was an avid reader, and loved to travel. She and Rocky had a fifth wheel trailer and traveled all over the United States. They celebrated 70 years of marriage together before Rocky passed away in April of 2017. Lois lived at Shepherds Village in Blair until November of2019 and then moved to Crowell Home. Lois is survived by her children: Charles “Chuck” (Janet) Wood of Omaha, Jean (Paul) Hundtoft of Blair; grandchildren: Beth Wood, Laura (Joey) Goodsell, Tony (Jen) Hundtoft, Anna (Ryan) Costella, John (Courtney) Hundtoft, Allison Wood; and ten great grandchildren. She was preceded in death by her husband Roscoe “Rocky,” her sister Marjorie, son and daughter-in-law John and Ruth Wood and grandson Nathan Wood. Memorials may be directed to First Lutheran Church, Blair, and to the Eastern Star.

Lois Jean Wood, age 98 of Blair passed away February 10, 2020. Memorial services are currently pending due to social interaction restrictions and will be updates as soon as they are reset. Burial will be in the Mount Hope Cemetery in West Point,... View Obituary & Service Information

The family of Lois Jean Wood created this Life Tributes page to make it easy to share your memories.