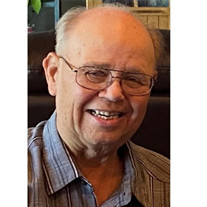 Lloyd F. Wright Jr. age 84 of Blair, passed away March 19, 2021 at his home in Blair. Public visitation will be held Monday, March 22 from 2 - 8 PM at Campbell Aman Funeral Home with family receiving friends from 6-8 PM. Funeral services will be held March 23 at 2:00PM at Reach Church (Formerly Country Bible Church) in Blair, military graveside services following in the Blair Cemetery. Lloyd was born on April 4, 1936 in Creston, Iowa the son of Lloyd and Ruth (Jackson) Wright Sr. He was raised in St. Joseph Missouri. After moving to Omaha, he joined the United States Army in 1954. On August 20, 1955 he was united in marriage to Joan Krogh in Omaha, Nebraska. In 1957 the couple welcomed their first child, Debbie. Lloyd attended Dana College in Blair, graduating in 1962 with a bachelor’s degree in accounting. In 1963, the couple welcomed their son Kenny. Lloyd held various accounting positions with different companies including Nebraska-Iowa Supply in Blair, and then began working for Equitable Federal Savings and Loan where he was the branch manager for Blair and Tekamah. He later retired from Washington County Bank in 1999, where he worked as a Mortgage Loan Officer. After retirement, he worked for over 15 years part time at MACC. Lloyd was a long-time member of First United Methodist Church in Blair, the Methodist Men’s Club, and Blair Kiwanis Club where he served as president multiple times; he also umpired and coached for many years with the Blair little league. Lloyd enjoyed hunting, watching baseball, especially his St. Louis Cardinals, Nebraska football, bowling, fishing, golf, and socializing with his coffee group at Butch’s; he especially enjoyed following his grandchildren in all their activities. Lloyd is survived by his wife Joan; children: Debbie Burger, son Ken (Sue) Wright; grandchildren: Chantell (Dennis) Gravedoni, Jeff Tierney, Chelsea (Dustin) Kugler, Camden Wright, and Angie (Terry) Bassinger; along with 12 great grandchildren; and sister-in-law Peggy Hipnar. He was preceded in death by his parents, sister Darlene, sons-in-law: Mike Tierney and Dave Burger. Memorials may be directed to the family for later designation.

The family of Lloyd F. Wright created this Life Tributes page to make it easy to share your memories.